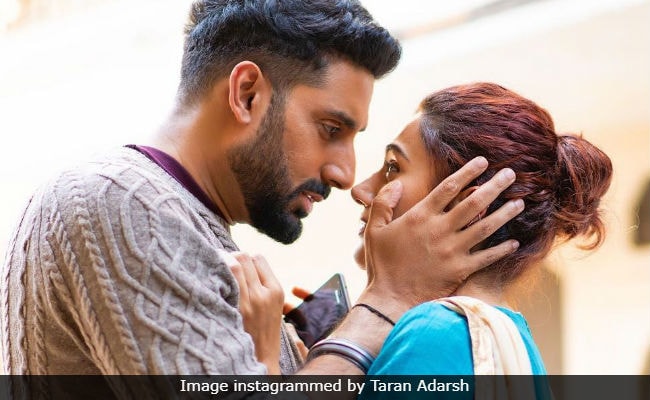 After a 'low' start Manmarziyaan, starring Taapsee Pannu, Abhishek Bachchan and VickY Kaushal, witnessed a healthy growth on Saturday, said trade analyst Taran Adarsh. Manmarziyaan, which is Abhishek's first film in two years, opened at Rs 3.52 crore and on the second day it managed to collect another Rs 5.11 crore bringing the total to Rs 8.63 crore. "Manmarziyaan witnesses a healthy 45.17 per cent growth on day #2. Although after a low day #1, the jump in business should've been higher. North circuits are performing better," tweeted Taran Adarsh. Manmarziyaan, directed by Anurag Kashyap, is a new and mature take at romance.

Here's the day-wise break-up of Manmarziyaan's collection at the ticket window:

Manmarziyaan opened to decent reviews from film critics and cine-goers alike. Abhishek, Taapsee and Vicky's colleagues cannot stop gushing about their fantastic performances. Film critic Saibal Chatterjee reviewed Manmarziyaan from the Toronto Film Festival (where it was screened before releasing in India) and said: "There is much to love in Marmarziyaan. Taapsee Pannu makes it consistently watchable and Anurag Kashyap's directorial flourishes lend the film a veneer of intelligence."

He added that Taapsee Pannu as Rumi is "stunning." Saibal Chatterjee wrote: "Take her out of Manmarziyaan and it wouldn't be half the film it is... Not that Abhishek Bachchan and Vicky Kaushal are washouts. Not by a long chalk. They give their roles all they have."