Manmarziyaan Movie Review: Taapsee Pannu Is Stunning, Not That Abhishek Bachchan Is A Washout

Manmarziyaan Review: Abhishek, Vicky give their roles all they have but the screenplay does not give them the bandwidth reserved for Taapsee. 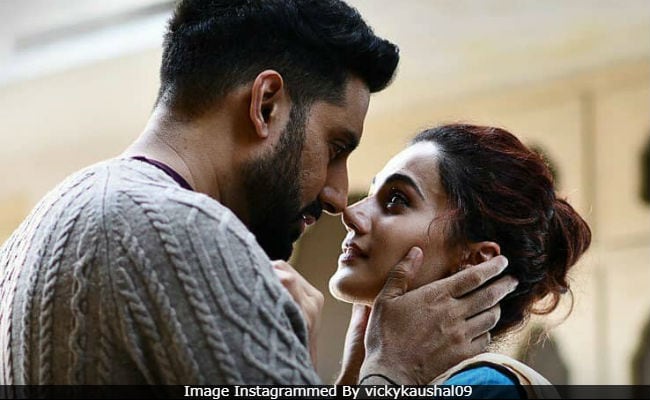 Anurag Kashyap's first full-on love story, Manmarziyaan is also the first film that the director has made from a screenplay not authored by him. He, however, loses no opportunity to inject an exaggeratedly campy style into the genre and juggle with its time-tested conventions to deliver a film that is fun for the most part. Well, almost.

Manmarziyaan, scripted by novelist Kanika Dhillon and dedicated to Amrita Pritam, hits the ground running. It keeps running without let. As a result, the film is often a touch breathless as the female protagonist, played with delightful aplomb by Taapsee Pannu, vacillates wildly between a lusty, commitment-phobic lover and a sedate, unflappable NRI banker whose life she enters, leaves and re-enters on the rebound times without number.

Rumi - yes, that is her name but she doesn't bring any Sufi subtlety to the expression of sexual desire - isn't as unlike other Bollywood heroines as she might seem at first flush. She, too, eventually seeks validation for her little rebellions from the men in her life, which includes a spirited grandfather who has been her anchor since the untimely death of her parents. But Pannu informs the charming character with a high degree of vivacity. It's infectious. It serves as the film's prime propellant.

Kashyap, on his part, makes the most of the film's Amritsar setting, not the least in the manner in which he uses the songs (music: Amit Trivedi; lyrics: Shellee). Barring a musical set piece early on in the film, the songs play on the background as an extension of the narrative, underscoring the outward moods and inner feelings of the lead trio.

The Punjabi kudi heroine breaks many of the rules laid down in stone in the Bollywood rom-com playbook to give us a feisty, fiery girl completely unapologetic about her runaway hormones. In her world, no line separates love and lust. They go hand in hand as desire rages untrammeled in her heart.

She attempts an elopement but bails out on a whim. She goes on a honeymoon, but whiles away her time watching animals mate on a television show. "Tu theek hai na (Are you all right)," her grandfather asks on her return. "Pata nahin (Don't know)," she replies. Is confusion, then, Rumi's middle name?

Two facets of Manmarziyaan are somewhat unconvincing. One, why must a liberated girl have to be sexually hyperactive to prove herself a true feminist? Surely, there could be other ways for her to let the world know that she is in control does not stand fools. If the character of Rumi does not ever falter in making an impression on the audience, it is principally because of Pannu's stunning performance. Take her out of Manmarziyaan and it wouldn't be half the film it is.

Not that Bachchan and Kaushal are washouts. Not by a long chalk. They give their roles all they have, but they are ill-served by a screenplay that does not give them the back-story bandwidth reserved for the lead actress.

In fact, the other half of the film - it is occupied by Vicky Kaushal, as a struggling DJ Sandzz who is madly in love with Rumi and cannot live without her, and Abhishek Bachchan, playing Robbie who does everything in his power to stand like a rock beside the heroine as she grapples with matters of the heart and mind that pull her in different directions.

As characters, neither of the two men quite match Rumi in terms of temperamental conviction. The one that seems to be sowing wild oats is a strictly one-woman man but he cannot make up his mind about his life and career and muster the courage to go the orphan's girl's family - besides the grandpa, there is an uncle, an aunt, a feckless elder male cousin and a sister - and ask for her hand in marriage.

The other guy - he cuts a rather sorry figure insisting on being taken for a ride by Rumi even after their marriage is solemnized - is a male avatar of the long-suffering Sati Savitri who revels in giving the woman as long a rope as she needs. That sounds great on paper. What a man! But he's too good to be true. Soon enough, the rope is long enough for him to hang himself with.

But does he? That is what Manmarziyaan sets out to unravel, but the answer that it comes up with is not only a bit of a copout, but also is more complicated than the question ever is.

Be that as it may, Manmarziyaan is a film that is likely to sweep you along as it goes down its lazy, loopy path in search of happiness for its endearing heroine. You will her on to settle down, but on her own terms. Yet you leave Manmarziyaan with the feeling that neither of the two men in her orbit deserve her.

To wrap up, there is much to love in Marmarziyaan. Taapsee Pannu makes it consistently watchable and Anurag Kashyap's directorial flourishes lend the film a veneer of intelligence.

Manmarziyaan, laced with humour and warmth, is a love story with flashes - only flashes, not a sustained flow - of inspiration.