Manmarziyaan Trailer: Taapsee Pannu and Vicky Kaushal love each other but she gets married to Abhishek Bachchan 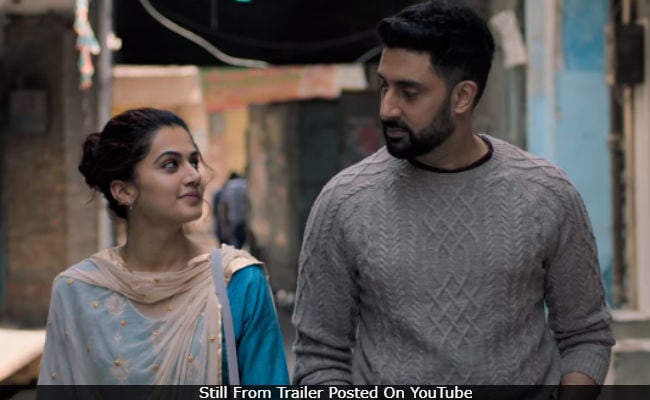 Abhishek Bachchan is back. He's back with Anurag Kashyap's Manmarziyaan, which also stars Taapsee Pannu and Vicky Kaushal. The trailer of the film released on Thursday morning. Manmarziyaan is a love story. Rumi (Taapsee) and Vicky (Vicky Kaushal) love each other but she gets married to Robbie (Abhishek). Vicky plays a happy-go-lucky man who does love Rumi but is afraid to accept the responsibilities that come with marriage. Robbie is well-settled and Rumi's parents choose him as her life partner. Love doesn't take over between Robbie and Rumi after their wedding. Will Rumi and Vicky reunite? Will Robbie help the two? These are some of the questions that come up at the end. Otherwise, Manmarziyaan, shot in extensively in Punjab, looks colourful. The dialogues are catchy and Vicky Kaushal, whom we have seen in serious roles so far, is playing completely the opposite.

Manmarziyaan is Abhishek's first film in two years. 2016's Housefull 3 was his last film. Abhishek shared experience of shooting the film in a lengthy note posted on Instagram and also thanked Anurag Kashyap.

Making a movie is a journey. The best thing about films is, the journey will always live on forever. As this part of the journey of #Manmarziyaan comes to an end.... Thank you @anuragkashyap10 for entrusting me with Robbie. I hope I can repay your trust, belief and faith in me. I hope I make you proud. And as and when you look back on this journey, my victory would be if you smile.... To my beautiful co-actors, Thank you! Especially the two mad hatters @taapsee and @vickykaushal09. Stay real, stay mad and mostly.... STAY PUNJABI!! @kanika.d you wrote it, we acted it. Let's hope our audience lives it! Thank you for your constant encouragement. I can't even begin to tell you how much it helped. To such an awesome crew- Thank you for being so kind. Aap sab ke saath " hum to udd gaye"!! #TakeTwo

Manmarziyaan went on floors in February this year. Of the film's plot, co-producer Aanand L Rai told news agency IANS that it is a "complex yet beautiful" love story. "We are excited about the film. It's a complex yet beautiful love story with relatable human emotions. I am happy that we have the perfect cast for this film," he said.