Sophie played the role of Sansa Stark in the show for ten years and eight seasons. 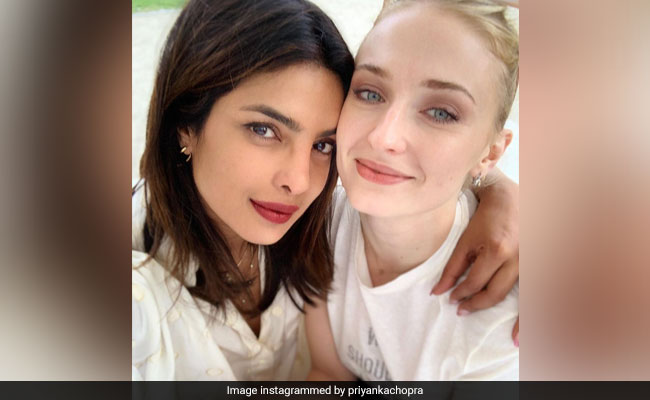 All hail the Queen in the North! Sophie Turner is trending on the Internet after she earned an Emmy nomination on Tuesday for her role as Sansa Stark in the recently concluded HBO series Game of Thrones. Sister-in-law Priyanka Chopra, husband Joe Jonas and brother-in-law Nick Jonas posted congratulatory messages on their respective social media accounts for the 23-year-old actress. Sharing pictures of herself with Sophie, Priyanka wrote: "We love you and are so incredibly proud of you" while Joe Jonas Instagrammed an adorable picture of the two and wrote: "Emmy nominated Sophie Turner, I'm so incredibly proud of you." Nick Jonas shared a list of Emmy nominees, as posted by Hollywood Reporter, and it featured Sophie's name. He expressed his excitement with an Instagram filter: "Yaass."

Sophie Turner is nominated in the 'Outstanding Supporting Actress' in the drama category for her Game of Thrones's role. Sophie played the role of Sansa Stark on the show for ten years and eight seasons. The 23-year-old actress was just 14 when she started filming the show in 2010.

Take a look what Priyanka posted for Sophie: 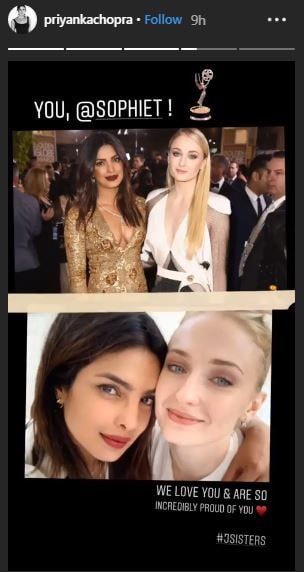 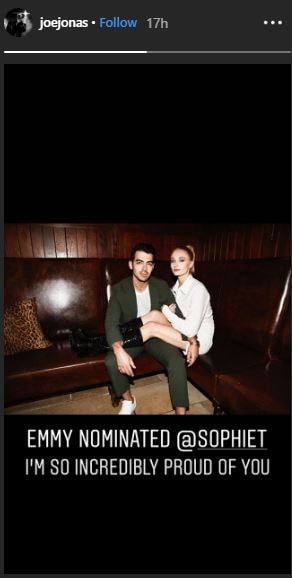 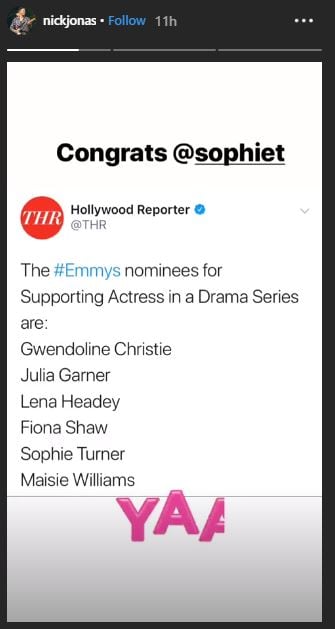 Later on her Insta story, Priyanka also gave a shout out to Rachel Broshanan for Marvelous Mrs Maisel, Milo Ventimiglia for This Is Us, Viola Davis for How To Get Away With Murder, Jimmy Kimmel for Jimmy Kimmel Live, James Corden for The Late Late Show with James Corden, Laverne Cox for Orange Is The New Black, Netflix's Queer Eye and Beyonce for her film Homecoming: A Film By Beyonce. 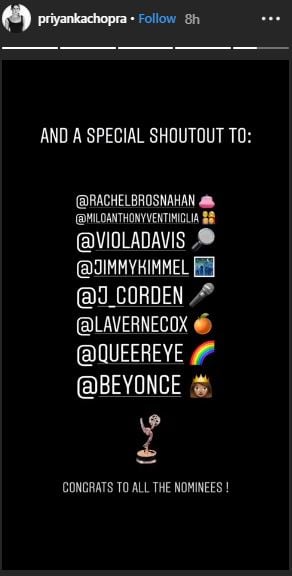 Sophie Turner and Joe Jonas recently shared adorable pictures from their honeymoon, which trended for days on the Internet. Sophie and Joe had a dreamy wedding in Sarrians, a city in the Provence region of the South of France, on June 30. The couple had an impromptu church wedding on May 1 in Las Vegas.

Paradise such a magical place #discoversoneva

Priyanka Chopra and Sophie Turner share a great bond, examples of which they frequently share on their Instagram feed. Recently, in an interview with Elle UK, Priyanka opened up about her equation with Sophie Turner and said: "I've never had a sister, so it's really nice to have Danielle (wife of Kevin Jonas) and Sophie, and just inheriting the family by proxy. Sophie is super talented, super funny and we have the most fun when we go out together. She's incredible." Priyanka, Sophie and Danielle refer to themselves with the self-assigned title 'The Jonas Sisters.'

On the work front, Priyanka Chopra awaits the release of her film The Sky Is Pink, which will open in theatres on October 11.