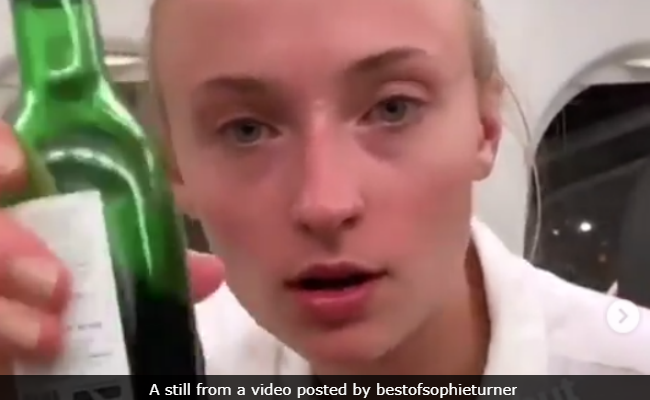 Sophie Turner in a still from the video. (Image courtesy: bestofsophieturner)

The Internet is currently obsessing over the viral Bottle Cap Challenge but seems like Sophie Turner is not a fan of the viral social media challenge. The Game Of Thrones star shared a video on her Instagram story, in which she sort of expressed how she truly feels about the challenge. In the viral video, the 23-year-old actress, seated in a flight, can be seen showcasing some interesting hand spins. In the latter half of the video, she unscrews the bottle and says, "Stop this now." Sophie's expressions are too amusing to be missed in the video. She captioned the video: "I look terrible but someone's gotta do it." The video was later curated by several fan clubs dedicated to the actress on social media.

Without much ado, check out Sophie Turner's rendition of the Bottle Cap Challenge:

Sophie Turner married singer Joe Jonas in France earlier this month, which was attended by close friends and family members. The actress shared a dreamy photograph from her wedding album and she captioned it: "Mr and Mrs Jonas." Take a look at the picture here:

Sophie Turner and Joe Jonas earlier had an impromptu chapel wedding in Las Vegas, which was officiated by an Elvis Presley impersonator. Here's a snippet from the wedding:

sophie and joe really just got married in vegas by a fake elvis using ring pops and it was all live-streamed on insta by diplo pic.twitter.com/DdGegvKANP

Sophie Turner is best-known for playing the role of Sansa Stark in the popular television show Game Of Thrones. On the work front, she was last seen in the film X Men: Dark Phoenix.