'Never Had A Sister': Priyanka Chopra On Sophie Turner. Also, What She Said About Meghan Markle

"I've never had a sister, so it's really nice to have Danielle and Sophie, and just inheriting the family by proxy," said Priyanka Chopra 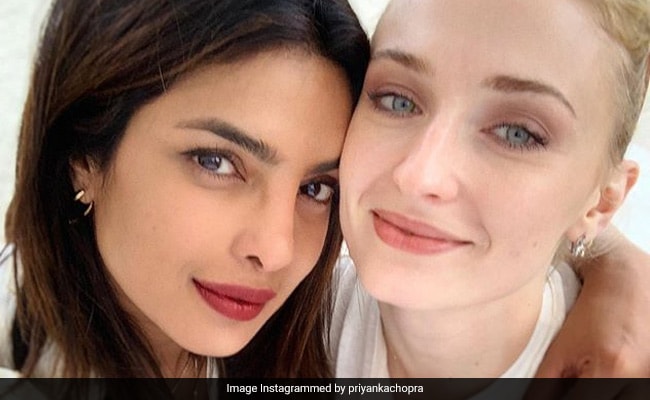 Priyanka Chopra, a global icon and a former Miss World, opened up about her entry to the Jonas family, her equation with Sophie Turner, high profile friend Meghan Markle and how her childhood shaped up while growing up in the presence of her doctor parents in a lengthy interview with Elle UK. When asked about Sophie Turner, who recently married Joe Jonas, Priyanka said: "I've never had a sister, so it's really nice to have Danielle and Sophie, and just inheriting the family by proxy. Sophie is super talented, super funny and we have the most fun when we go out together. She's incredible. By the time this comes out, she'll be the new Mrs Jonas - I can't wait for her to join the family." Priyanka (married to Nick Jonas), Sophie (Mrs Joe Jonas) and Danielle (wife Kevin Jonas) popularly refer to themselves with the self-assigned titled 'The Jonas Sisters.'

Priyanka Chopra was born to Madhu Chopra and Dr Ashok Chopra (he died of cancer in 2013) and has a younger brother Siddharth Chopra. Her cousins Parineeti Chopra, Meera and Mannara Chopra are all actresses.

Talking about life after becoming Priyanka Chopra Jonas, the 36-year-old actress said: "I'd never realised having a husband and a boyfriend are such different things. When you say your vows, it's like, this person is my family, and it's the family I chose. There's a weird responsibility to them. And a safety that comes from it,' she grins. We are learning about each other every day." Priyanka and Nick had a big fat wedding in Jodhpur's Umaid Bhawan Palace in December last year and the cleebrations continued for three days.

The man of the hour!! @franklinjonas we r so proud of u.. "Graduate" ! Can't wait to witness what else u will accomplish in your life. To bigger and greater heights! Love u @theblackbirdacademy

It appears that Priyanka must have given the interview sometime in early May or before because when prompted about Meghan Markle, Duchess of Sussex, she said: "By the time this comes out, she will have a baby." Meghan Markle and Prince Harry welcomed son Archie on May 6. "Megs... she was always meant for big things," said Priyanka, adding: "To be a change and be an important voice in doing that. It's amazing that she found that calling and has the platform to be able to do it." Priyanka and Meghan's friendship began after they connected at an event hosted by Elle in 2016.

Priyanka Chopra, who lost her father at an early age, said in the interview that her being crowned Miss World at the age of 18 and then her journey onwards was because her father's encouraging attitude: "'Look, you're just 18. Take a year, two years, whatever, and try it. I don't ever want you to have a 'what if' in your life. You can always go back to school'," Priyanka quoted her father's words.

6 years. Seems Like just yesterday we lost you.. I miss you Dad. Inexplicably.

On the work front, Priyanka has a film with Mindy Kaling in production while she's awaiting the release of The Sky Is Pink in India. Priyanka is also UNICEF's goodwill ambassador for child rights. She also promotes regional movies via her production house Purple Pebble Pictures.