Apart from Nick Jonas and his father Kevin Jonas Sr, celebrities such as Hina Khan and Mindy Kaling posted comments 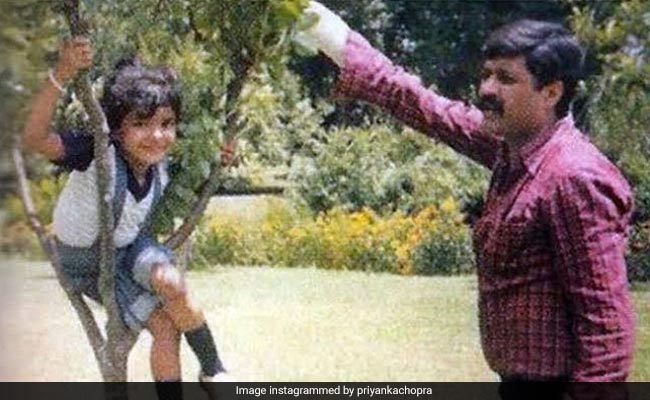 Actress Priyanka Chopra shared an emotional post on her father Dr Ashok Chopra's death anniversary saying: "Seems Like just yesterday we lost you... miss you Dad. Inexplicably." Priyanka dug up a picture from her childhood photo album to go with the heartfelt caption. In the picture, a little Priyanka can be seen goofing around with her father in a garden. In the comments section, Priyanka's singer husband Nick Jonas posted a heart emoticon while her father-in-law Kevin Jonas Sr wrote: "All our love sweet daughter-in-Law. Nothing can replace such a special man but we are here to surround your heart with love and support."

Several celebrities including Hina Khan, whom Priyanka met at a party at Cannes Film Festival, and Mindy Kaling, with whom Priyanka is collaborating on a project, posted heartfelt comments for the actress.

6 years. Seems Like just yesterday we lost you.. I miss you Dad. Inexplicably.

Priyanka Chopra was quite close to her father and a tattoo on her wrist, which reads "Daddy's lil girl," is dedicated to him. In 2017, Priyanka Chopra produced a Punjabi film, titled Sarvann, in which she used Dr Ashok Chopra's rendition of Mittar Pyaare Nu, one of the Shabads by Guru Gobind Singh. At that time, she had said: "It was one of my original reasons for making Sarvann."

Priyanka Chopra is currently in India to complete her work-in-progress film The Sky Is Pink, co-starring Farhan Akhtar and Zaira Wasim. She is co-producing the film with Siddharth Roy Kapur while Shonali Bose is the film's director.