Soorma: Neha Dhupia Posts Not Just Cute Pics With Angad Bedi But Also Reviews Him In The Sandeep Singh Biopic

"You are rock solid, sincere and reliable as an actor just as you are as a husband," Neha Dhupia wrote for Angad Bedi 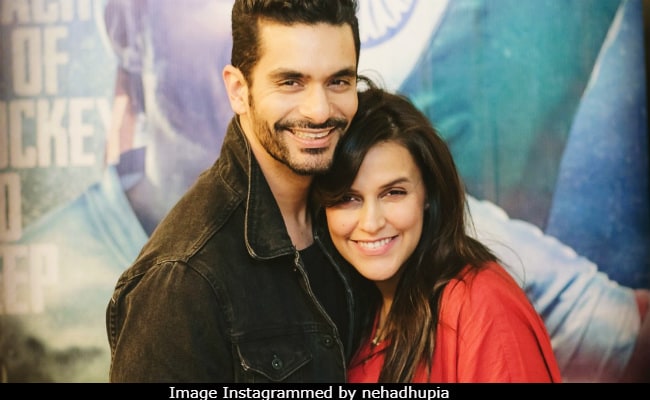 Expect not just cute photos of Angad Bedi and his "proud" wife Neha Dhupia to arrive on your feed, but also a review of Angad in Soorma. The biopic of legendary hockey champ Sandeep 'Flicker' Singh, which is headlined by Diljit Dosanjh, released on Friday, in which the 35-year-old actor is cast as Sandeep's brother Bikramjeet Singh, who also plays hockey. "Proud" wife Neha Dhupia, who married Angad Bedi in May this year, watched the film and has everything nice to say about her husband. On Instagram, she reviewed Angad's performance in Soorma and wrote: "I am so, so, so proud of you my love Angad... the way you gave life to the reel life Bikramjeet... you are rock solid, sincere and reliable as an actor just as you are as a husband." Aww... isn't that cute?

I am so so so proud of you my love @angadbedi .. the way you gave life to the reel life @bikramjeet007 ... you are rock solid , sincere and reliable as an actor just as you are as a husband #soorma out now ... @rjdeigg

Soorma may have opened to mixed reviews on Friday but Angad Bedi's performance has indeed been appreciated by critics. In his review for NDTV, Saibal Chatterjee writes "Angad Bedi has a meaty role - he digs his teeth into it and steals many a scene." In the review, his character has been described as the "hugely supportive elder brother" of Sandeep Singh.

The real-life Sandeep Singh and Bikramjeet Singh have helped choreograph the hockey sequences in the film. This is what Angad Bedi shared earlier on Friday:

Soorma is out there.. go make it yours people. It needs your support. This is a story which needs to be told and seen. Jaao aur sab ko lekar jaao. @diljitdosanjh @taapsee @sandeep_rebirth @bikramjeet007 @chitrangda @thesneharajani @pranjalnk @sonypicsprodns @shaadalisahgal

Directed by Shaad Ali, Soorma tells the story of Sandeep Singh, who made an epic return to the game after he was paralysed waist-down following an unfortunate incident - Sandeep Singh was shot on his way to join the Indian team leaving for the hockey world cup in 2006. Sandeep Singh captained the Indian hockey team between 2009 and 2010. In Soorma, Angad Bedi and Diljit Dosanjh co-star with Taapsee Pannu and Vijay Raaz, who also play significant roles.