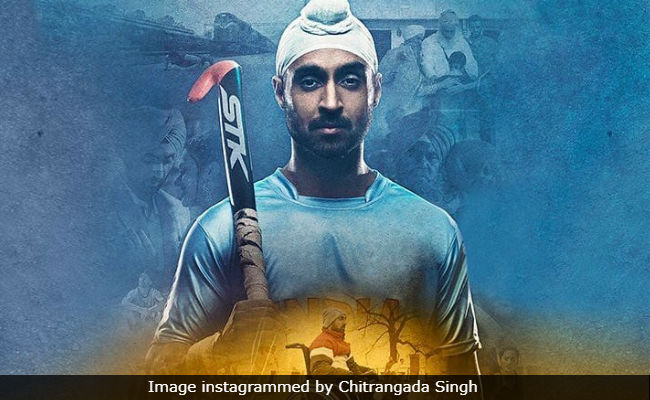 The film opens with a woman's voice on the soundtrack. It belongs to the character played by Taapsee Pannu. She introduces herself as field hockey player Harpreet Kaur but hastens to add that this isn't her story. It is Sandeep Singh's. It's the greatest comeback story in the history of the game. Doubtless, the real-life saga that inspired Shaad Ali's Soorma bordered on the miraculous. The film fails way short of harnessing its full dramatic potential. Meant to be a celebration of a sportsman's resilience, this is a mechanical, hackneyed, dour re-enactment of a remarkable life. The Sandeep Singh story deserved far better.

Returning to Harpreet, the Soorma protagonist, an ace drag-flicker who beat the odds to return to action after a freak accident left him paralysed from the waist down, had a childhood sweetheart who played hockey at the same Shahabad academy as him. She eventually married him and gave up the game. 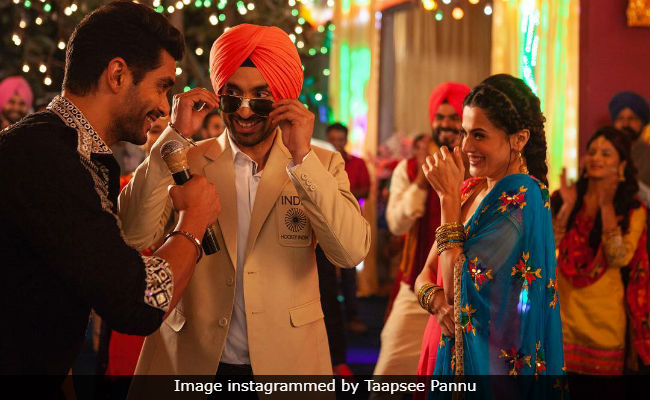 Soorma, on its part, tells us repeatedly that Sandeep Singh took up hockey in order to win over the girl he loved, a fact for which he is at one point mocked by his otherwise hugely supportive elder brother Bikramjeet Singh (Angad Bedi), a no mean wielder of the hockey stick himself. A girl, but no goal, he is ticked off. Chastened, Sandeep intones: "Main India kheloonga India ke liye (I will play for the sake of the country)."

The screenwriters have changed the name of the woman in Sandeep's life - and much else - and the result isn't entirely salutary. Soorma is as desultory as a goalless draw, which, as any hockey fan will tell you, is a near impossibility. This film achieves the impossible: it turns an inspirational real-life champion who wrested back the India colours after a long layoff into a hollow Bollywood hero who never comes out of the torpor that the screenplay foists upon him.

Sandeep Singh, as envisioned by Shaad Ali, is as dynamic as a stenciled, unidimensional sketch. Lead actor Diljit Dosanjh does his very best to inject life into the character. Hobbled by Bollywood cliches that seem out of place in a sports biopic, he is left stranded in the midst of dreary moves and manoeuvres. 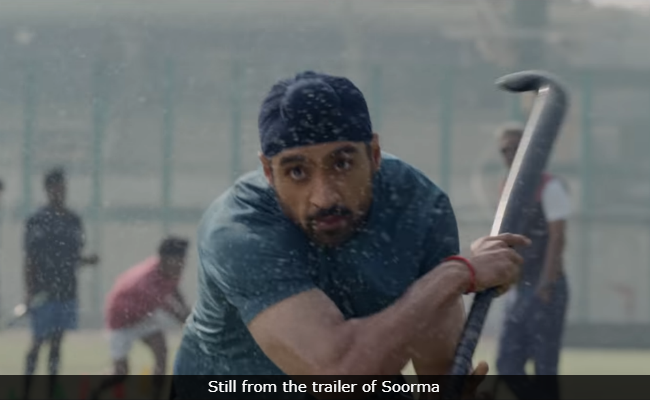 Lack of depth permeates the whole film. The two hockey coaches we meet in Soorma - Kartar Singh (Danish Husain) and Harry (Vijay Raaz) are crass caricatures. The former, who runs the coaching centre in Shahabad in Haryana's Kurukshetra district, is a terror. He subjects his wards to physical torture. A traumatized Sandeep, aged nine, drops out of the academy.

A decade later, his brother, who is nursing the disappointment of being passed over for national duty, spots the boy's natural talent for drag flicks - a trait that he picked up in the course of launching hockey balls into his tauji's farmland to chase away birds. 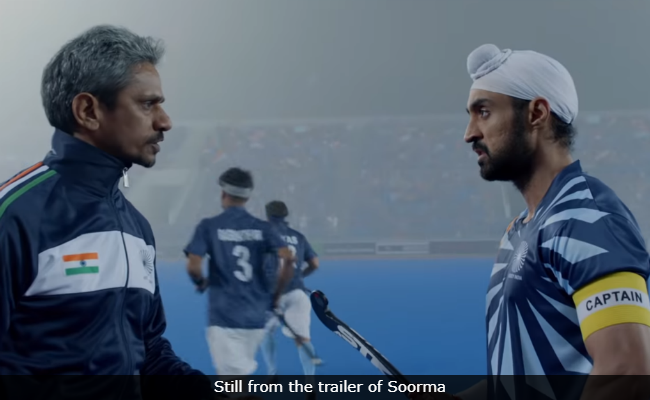 So, Sandeep returns to the academy and takes the coach's excesses in his strides simply because he has now fallen head over heels for Harpreet Kaur - yes, the selfsame narrator of the story - and is willing to sacrifice everything for her. Their love story is a crashing bore despite the fact that a pretty Pannu might, by all reckoning, look like a trophy good enough to play for. But she is a girl with a mind of her own and, therefore, does not let him have it too easy.

The second coach, who also revels in threatening to thoko (hit) and phodo (smash) everyone in sight, takes Sandeep under his wings in Patiala's sports institute and helps him hone his skills. Soon enough, we see him jumping around like a frisky kid on the sidelines as the defender goes about scoring plenty of penalty-corner goals for the country. Predictably, the hockey action, more often than not, centres on India-Pakistan matches in which the boys in blue emerge victorious.

Earlier in the film, in a national-level tournament, the Patiala team takes on boys from Meerut in the latter's backyard. Young men in the stands have country-made firearms to scare away the opposition.

But the Patiala coach is no pushover. He confronts the armed men and advises them to put away their guns. "Bihari hain hum, thook-ke maathe mein chhed kar denge (I am a Bihari, I'll spit and drill a hole in your forehead)." That is Soorma at its most humorous: bad news for a film about an athlete up against the harrowing prospect of a life on a wheelchair.

The second half of Soorma is somewhat better than the first, which ends with the mishap that threatens to put paid to Sandeep's career. Harpreet pays him a visit in the hospital, delivers a gentle pep talk and then decides to leave him to his own devices so that the man is compelled to fight to get back on his feet. 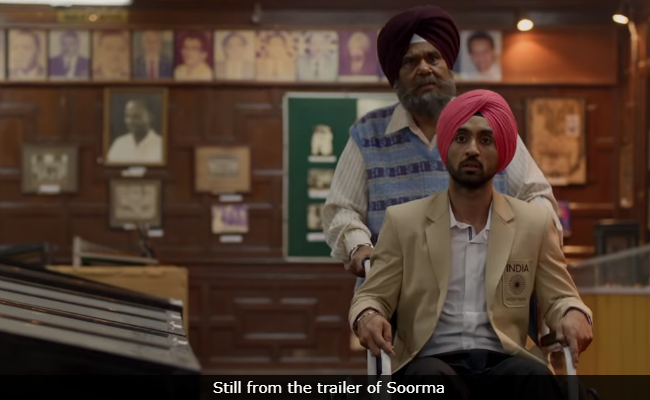 In another strand of the story, an emotionally disturbed Sandeep's recriminations upset his brother. There is one shrill confrontation scene designed to move the audience. The rehab in Holland, which, like the training scenes and the blossoming of young love passages, plays out to the accompaniment of a rousing song. Music has never sounded so gratuitous in a Hindi film.

Dosanjh cannot be faulted. He makes the best of a bad deal. Pannu, an actress who always gives the impression that she is sailing through with ease, does her bit to give Soorma its rare convincing moments. Angad Bedi has a meaty role - he digs his teeth into it and steals many a scene. Satish Kaushik, in the role of Sandeep's travelling salesman-father, adds a few bright spots to Soorma. 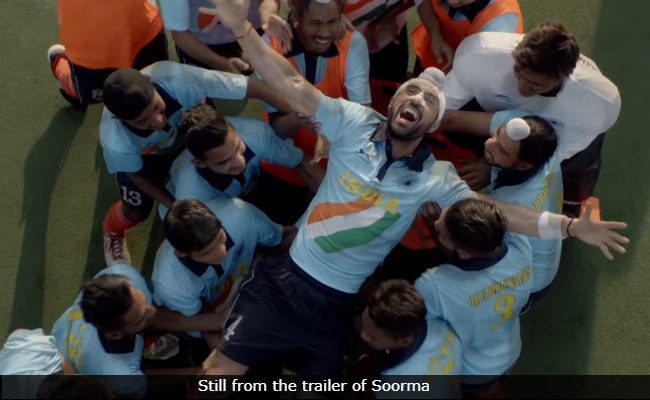 Soorma is more drag than flick, a hockey film sans genuine impetus. It is nowhere near the league of Chak De India despite telling a story that is no less intense than a wrongly victimized coach's struggle for redemption. Come to think of it, the Shimit Amin film was made over a decade ago. Why hasn't the Mumbai movie industry delivered another sports drama quite that good? The reason is obvious: Bollywood just doesn't do sports well. Its rules militate against the genre. Soorma, a wasted opportunity, demonstrates why and how.