Sonam Kapoor's Defence Of Swara Bhasker 'Has Nothing To Do' With Pakistan Comments, Okay?

"My defence of Swara has nothing to do with her comments on Pakistan! Get your fact right and stop trying to spread mischief and hate," wrote Sonam 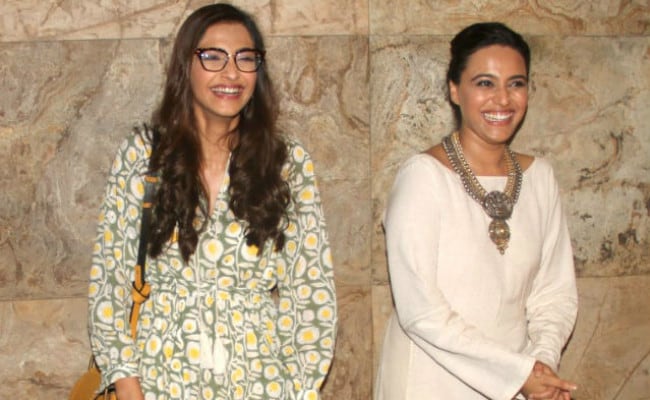 New Delhi: Sonam Kapoor recently posted a clarification about a comment she made earlier this week, after she spotted a tweet, which appeared to be misinformed. Sonam co-stars with Swara Bhasker in new film Veere Di Wedding, after whose release, Swara was trolled for a particular scene in the film. After Swara was criticised on social media for featuring in the bold scene, Sonam told news agency ANI in New Delhi: "I think people just like to troll her because she has an opinion and a point of view and I guess that shows how much they love her because the other side of hate is always love. So Swara, you have a lot of lovers." Meanwhile, Swara Bhasker was also slammed by Pakistani actress Urwa Hocane for her apparent "contradictory" statements about Pakistan.

Soon after, a tweet reported that Sonam defended her co-star saying trolling shows that the Internet loves her "After the backlash that Swara Bhaskar received regarding her remarks about Pakistan." Sonam was quick to spot the tweet and rectify the report, saying: "My defence of her has nothing to do with her comments on Pakistan! Get your fact right and stop trying to spread mischief and hate!"

My defence of her has nothing to do with her comments on Pakistan! Get your fact right and stop trying to spread mischief and hate! #aproudworldcitizen#feminist#liberalhttps://t.co/QlakSjBT5c

Before Sonam appeared to defend her co-star, Swara did a brilliant job on Twitter posting a message for "paid trolls." A particularly-worded tweet about Swara trended over the weekend after a post criticising the concerned scene from Veere Di Wedding was repeatedly posted on several Twitter accounts. "I wish paid trolls would at the very least re-arrange the sentences and run a spell check before their paid tweet attacks," Swara had tweeted.

.@Joydas you bring so much joy to my Twitter timeline.. I wish paid trolls would at the very least re-arrange the sentences and run a spell check before their paid tweet attacks #PaidTrollsKiPolKhulGayi#SakshiSlayshttps://t.co/pxHyjKthXH

Swara Bhasker also trended after Pakistani actress Urwa Hocane tweeted about how her views about Pakistan changed after Veere Di Wedding was banned in Pakistan. Urwa substantiated her point sharing two video clips of Swara - one from her 2015 visit to Pakistan when she said, "every city fails in front of Lahore,' and the second clip was from a recent interview where she described Pakistan as a "failing state." Veere Di Wedding, which is a story of a bride-to-be and her three friends, was banned in Pakistan because of the "vulgar dialogues and obscene scenes" as per the Censor Board there.

Promoted
Listen to the latest songs, only on JioSaavn.com
From the citizen of the Phenomenal Pakistan— URWA HOCANE (@VJURWA) June 2, 2018

Directed by Shashanka Ghosh, Veere Di Wedding has garnered almost Rs 50 crores at the box office in less than a week.