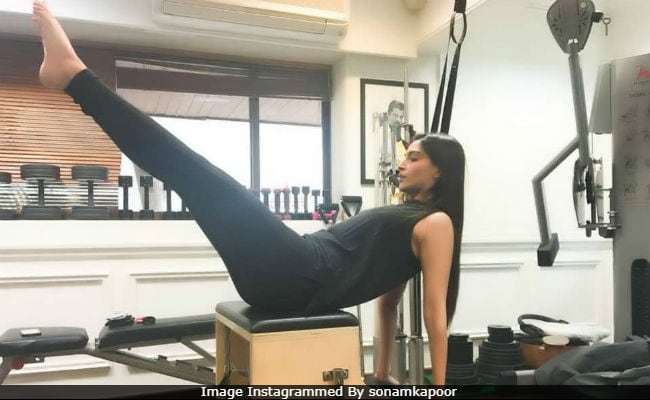 New Delhi: Actress Sonam Kapoor, currently busy in London, has finally taken the fitness challenge, after being nominated by colleague Tiger Shroff, a couple of weeks ago. The fitness challenge is a social media campaign started by Union Minister Rajyavardhan Singh Rathore. Sonam has Instagrammed a picture of herself working out in the gym and interestingly, she has chosen to nominate her husband Anand Ahuja, dad Anil Kapoor and her brothers Arjun and Harshvardhan. "Excited about this challenge. Thank you, Tiger Shroff for nominating me! Kudos Rajyavardhan Singh Rathore for pushing India to becoming stronger. Here's one of my favourite workout moves! I nominate Anil Kapoor, Anand Ahuja, Arjun Kapoor and Harshvardhan," Sonam, 32, captioned her post.

Sonam Kapoor will ring in her 33rd birthday (June 9) in London with Anand and sister Rhea. Her close friends Shehla Khan and Samyukta Nair will also reportedly join them. Sonam married Anand, a businessman, in Mumbai on May 8.

Her recently-released film Veere Di Wedding was last Friday's big release, in which Sonam co-starred with Kareena Kapoor, Swara Bhasker and Shikha Talsania. Veere Di Wedding has made over 48 crore at the box office.

Sonam Kapoor is also awaiting the release of Ranbir Kapoor's Sanju this month. In the film, a biopic on actor Sanjay Dutt, she plays one of his love interests. Sanju releases on June 29.
Comments
Sonam Kapoorsonam kapoor fitness challengesonam kapoor anand ahuja

"We Can Laugh With Those We Fought So Hard": Shah Rukh Khan Shares "Lockdown Lessons"