So, This Is How Amitabh Bachchan Shows Up On Set

"Toy boy entering the sets to work... on buggie wheels," wrote Big B in the caption 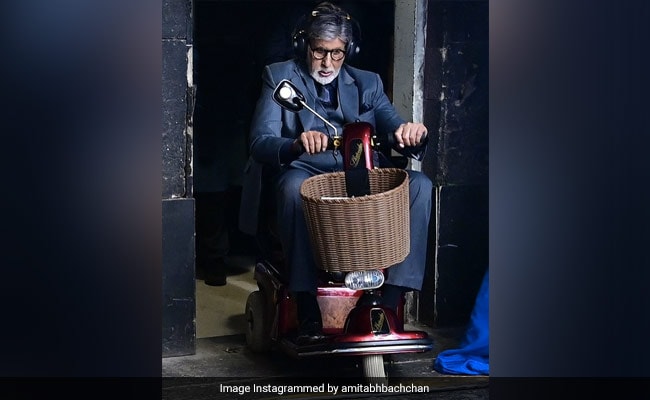 Amitabh Bachchan, who often entertains his fans through his social media posts, did something similar on Wednesday. The 78-year-old actor posted an epic picture of himself that is, without a doubt, all things fun. In the photo, Amitabh Bachchan, wearing a navy blue three-piece suit, can be seen "entering the sets to work" on what appears to be a three-wheel bike. He can also be seen sporting headphones. "Music in the ears... toy boy entering the sets to work... on buggie wheels," wrote Amitabh Bachchan and added: "Yuuuhoooo." The actor shared some more pictures of himself riding his unique bike on his blog and explained why he arrived on the set on such a toy bike.

"When work becomes toy boyish... and the need to travel within gets buggied and driven within confines of the set... then it's time to resolve the actual need for colleague that has her foot in plaster and cannot move without help of wheel chair...so...Provide her with my own hospital vehicle, so she can have the comfort of not using walkers or crutches... just a friendly gesture for a lady in some distress," wrote Big B in his blog.

Big B fans can't get enough of his latest photo. They dropped comments like "looks super fun" and "still young at heart" on his post. A user wrote: "Never let the kid inside you die."

Big B will next be seen in Ayan Mukerji's Brahmastra, Chehre, sports drama Jhund and Ajay Devgn's Mayday.