Seen This Pic Of 'Bumble Bees' Priyanka Chopra And Anusha Dandekar With Friends ?

Anusha Dandekar made perfect use of pun in her caption 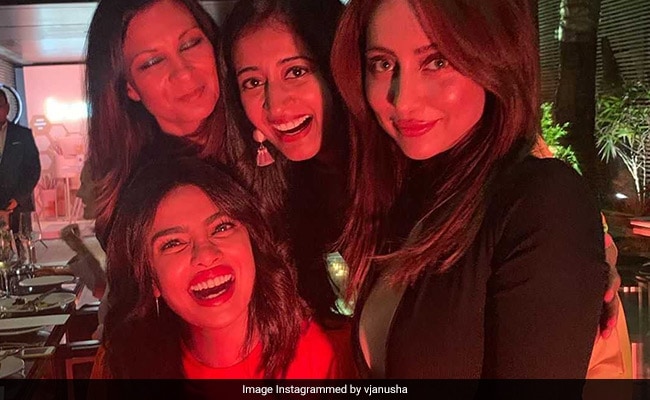 Anusha Dandejkar delighted her Instafam with a super cool picture of herself along with her "Bumble bees" Priyanka Chopra, Anjula Acharia and Priti Joshi. VJ Anusha made the perfect use of pun when she captioned her post. In case you still haven't figured out the reason she captioned the post the ways he did, we are here to help. All the women in the aforementioned post, are associated with the dating app Bumble. Priyanka Chopra has invested in the popular dating app while Priti Joshi is the global director of strategy for the company. The picture also features entrepreneur and Priyanka Chopra's manager Anjula Acharia. Hence the "Bumble Bees" reference.

Bumble, which was made available in India last year, was originally launched in 2014 and is a location-based app that helps people connect over dating interests or professional requirements.

Though Priyanka Chopra hasn't reacted to Anusha's post, we would love to see her response to the picture. Meanwhile, take a look at the post here:

Anusha Dandekar is a close friend of Priyanka Chopra and she received an invite to the actress' and Nick Jonas' grand wedding which was held in December last year. Anusha even shared pictures from Priyanka and Nick's wedding festivities.

On the work front, Priyanka Chopra will next be seen Shonali Bose's The Sky Is Pink, co-starring Farhan Akhtar and Zaira Wasim. Her last big release was the Hollywood film Isn't It Romantic?