Priyanka Chopra's wax statue was unveiled at the Madame Tussauds museum in London on Tuesday. The 36-year-old actress, who enjoys a star status across the globe, had worked with the Madame Tussauds team on the four-figure project which took place in a private setting at her New York City apartment in 2018, reports news agency ANI. The actress was not present during the unveiling of the wax statue. However, it wouldn't be wrong to say that the wax figure perfectly encapsulates the essence of Priyanka Chopra's personality and the resemblance is uncanny.

Meanwhile, Priyanka Chopra's team shared pictures of the actress' wax statue and the caption on it read: "Apart from the World Cup, England just got even more exciting as PC's Madam Tussauds wax statue unveiled in London! So good." Take a look at the pictures here:

Priyanka's wax statue immaculately matches her 2017 Golden Globes look. The wax figure has been styled in a gold sequin gown by Ralph Lauren. In case you don't believe us, take a look at Priyanka's original look and see for yourself. 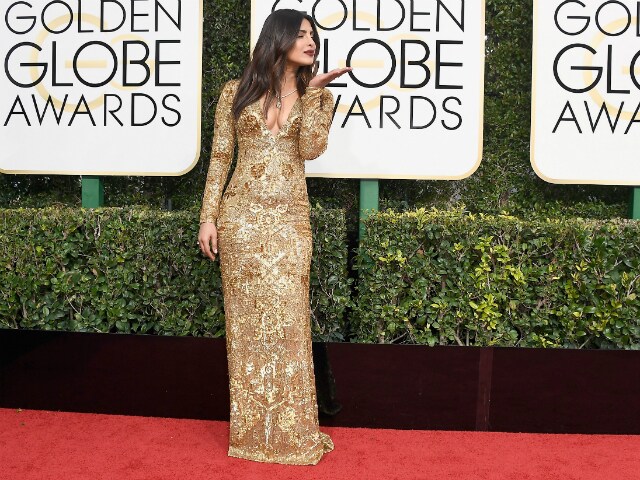 Priyanka Chopra at the Golden Globe Awards red carpet in 2017.

Besides London, the Quantico actress has wax statues in New York, Sydney and Singapore. Take a look at all the statues of Priyanka Chopra here:

"Fans have been waiting to see the anticipated London arrival since the first figure was revealed earlier this year in Priyanka's adopted hometown of New York. Today, Madame Tussauds London joins its sister sites in Sydney and Asia in unveiling their figures to long-awaiting fans," read an excerpt published on Madame Tussaud's official website.

On the work front, Priyanka Chopra was last seen in the Hollywood film Isn't It Romantic?. Her next project is Shonali Bose's The Sky Is Pink, co-starring Farhan Akhtar and Zaira Wasim.