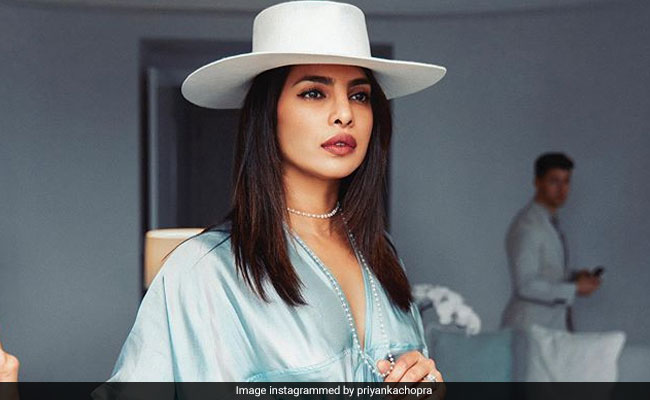 First, congratulations on your wedding, Chris Pratt and Katherine Schwarzenegger! The Guardians Of The Galaxy actor announced his wedding to long-time girlfriend Katherine - Arnold Schwarzenegger's daughter - with an adorable Instagram post only to be showered with congratulatory messages. Interestingly, we also spotted Priyanka Chopra congratulating the couple: "Amazing! Congratulations," she wrote. Priyanka, who has featured in three Hollywood films since her film debut in the West in 2012, has reportedly been roped in to co-star with Chris Pratt for his new project Cowboy Ninja Viking. Such reports sprung out on the Internet around May last year, fuelling speculation that Priyanka quit Salman Khan's Bharat because of a new Hollywood project.

On Instagram, Chris Pratt was also congratulated by his Avengers co-stars Gwyneth Paltrow and Zoe Saldana, Guardians Of The Galaxy-series director James Gunn, Jason Momoa and others. But take a look at Priyanka Chopra's comment on Chris Pratt's wedding post, in which he wrote: "This morning we feel nothing but blessed."

Yesterday was the best day of our lives! We became husband and wife in front of God, our families and those we love. It was intimate, moving and emotional. We feel so blessed to begin this new chapter of our lives. We are so thankful to our families and our friends who stood with us and grateful to Mr. Giorgio Armani who created a once in a lifetime dress for Katherine to wear and for me, the perfect suit. This morning we feel nothing but blessed.

However, neither Priyanka Chopra nor the film's team released an official statement about the actress' reported entry to the cast. According to a Hollywood Reporter article from last year, Priyanka will play the love interest of Chris Pratt in the movie, which was earlier slated to release in June but has been rescheduled by Universal Studios now.

Priyanka Chopra's Hollywood debut was Dwayne 'The Rock' Johnson's 2017 film Baywatch. She featured in A Kid Like Jake in 2018 and then played a yoga ambassador in Isn't It Romantic, also starring Rebel Wilson and Liam Hemsworth. In Bollywood, Priyanka has Shonali Bose's The Sky Is Pink in the line-up.