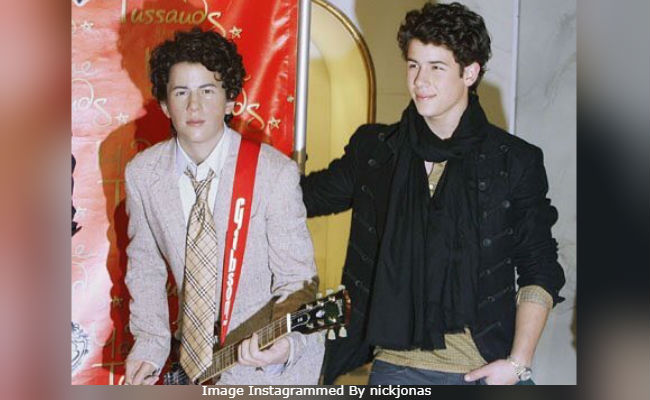 Singer Nick Jonas recently treated his Instafam to a picture of himself and his wax figure at Madame Tussauds New York, which was unveiled a decade ago. The post comes a day after his actress wife Priyanka Chopra also unveiled her first-ever wax statue at the same museum. "Weird flex but okay," read Nick's caption for the post. The wax figure is styled on the look Nick sported on the cover of Burnin' Up album, which also featured his brothers Kevin and Joe. They also have their wax statues at Madame Tussauds New York. Take a look at the throwback photo Nick Jonas posted.

Priyanka Chopra shared a set of pictures from Madame Tussauds on Thursday evening. On her Instagram stories, she revealed that the process began six months ago. The video shows the team of Madame Tussauds taking her measurements. Here's how Priyanka's wax figure at Madame Tussauds looks like.

<-- Me when I saw my new wax figure at Madame Tussauds in NYC @nycwax (Coming to other locations soon!!) 4 figures. UK, Australia, Asia coming up! Thank you to the Madame Tussaud's team.

She will soon get a wax figure at Madame Tussauds London too.

Priyanka Chopra, 36, and Nick Jonas, 26, married in Jodhpur in December 2018. Their lavish wedding was attended by their families and close friends only. The couple hosted three wedding receptions in India and last month, Nick's parents Paul Kevin Jonas and Denise Jonas threw a party for them in the US.

On the work front, Priyanka Chopra will be next seen in the Hollywood film Isn't It Romantic? and The Sky Is Pink is her forthcoming Bollywood project. Nick Jonas recently signed up for Jumanji: Welcome To The Jungle sequel.