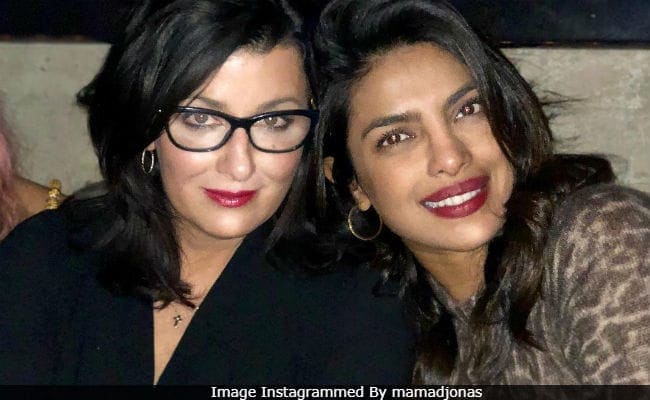 Priyanka Chopra, who was a guest on The Tonight Show Starring Jimmy Fallon recently, Instagrammed a few photos of her bold look for the night and her husband Nick Jonas agreed with the rest of her Instafam that she looked "hot." But the story is not about that. We spotted another comment on Priyanka Chopra's post - one by her mother-in-law Denise Jonas, who wrote: "Love you daughter." Aww, how sweet is that! For the show, Priyanka opted for a white pant-suit, which she accessorised with neatly styled hair and bright lips. "When you pose too hard... before and after," she captioned the photo.

When you pose too hard...#beforeandafter Tune into @fallontonight tonight! @jimmyfallon missed our food challenge, but there was so much to catch up on. Always the best seeing you! to @theroots

Screenshot of Nick and Denise Jonas' comments on Priyanka's photo

Well, this isn't the first time that Priyanka's mother-in-law commented on actress' posts. Ahead of the wedding, Priyanka shared pictures from her crazy bachelorette trip to Amsterdam on Instagram. One particular photo of "the morning after" Priyanka and Sophie Turner could be seen wearing eye masks with hangover written on them. "I know how to fix that," Denise Jonas had commented.

Denise had also dedicated an adorable post to Priyanka on her Instagram with the words: "Daughter-in-love." Soon after Priyanka and Nick's roka ceremony, Denise Jonas wrote "Welcome to the family" to Priyanka Chopra in an Instagram post.

"I have found the one whom my heart loves" Song of Solomon 3:4 Congratulations @nickjonas @priyankachopra on your engagement. Welcome to the family!

Priyanka Chopra and Nick Jonas had a destination wedding in December. On the work front, Priyanka Chopra is looking forward to the release of her third Hollywood film Isn't It Romantic? and in Bollywood, she has Shonali Bose's The Sky Is Pink in the line-up. Priyanka Chopra is also producing a Marathi film titled Firebrand, which will release on Netflix later this month.