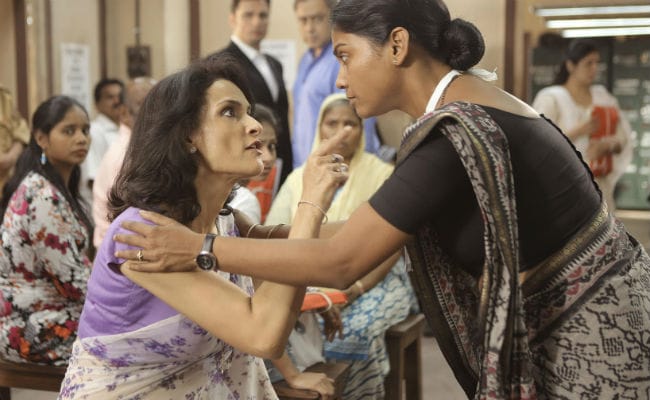 Priyanka Chopra's fourth Marathi project, titled Firebrand, is all set to premiere on Netflix on February 22, 2019. The film has been directed by National Award-winning director Aruna Raje and it will release in 190 countries. Priyanka Chopra, who co-owns Purple Pebble Pictures with her mother Madhu Chopra, said that she is "thrilled" about the film's worldwide premiere on Netflix. The actress shared the film's poster on Twitter on Wednesday. In her tweet, Priyanka described the film as "powerful and pivotal" and wrote: "Two words that best describes our latest Purple Pebble Pictures project. It's an optimistic story that needs to be watched by audiences far and wide. I'm proud to bring Firebrand on February 22 to Netflix... Can't wait for you guys to watch it!"

Powerful and pivotal. Two words that best describes our latest @PurplePebblePic project by @aruraje. It's an optimistic story that needs to be watched by audiences far and wide. I'm proud to bring #Firebrand22Feb to @NetflixIndia...Can't wait for you guys to watch it! pic.twitter.com/znwF2AzkCR

Speaking of releasing the film on a digital platform, Priyanka said in a statement, "A story like Firebrand deserves to reach audiences far and wide and I'm thrilled to be bringing this to Netflix." The 36-year-old actress added, "The age of digital has changed the way we consume content. Today, the story is king and audiences are open to and accepting of all kinds of genres. We scroll for content that appeals to our mood and mind, equally. This definitely was one of the major reasons behind our move of taking our latest Marathi project Firebrand straight to Netflix."

Firebrand touches upon the concept of modern day relationships and its complexities. The film showcases the story of a successful lawyer and a sexual assault survivor, played by Usha Jadhav, who manages to strike a balance between her personal and professional life while she deals with PTSD (Post-traumatic stress disorder). Besides Usha Jadhav, Firebrand also stars many well-known Marathi actors such as Girish Kulkarni, Sachin Khedekar and Rajeshwari Sachdev in pivotal roles.

Firebrand will be Netflix's first licensed original film in Marathi. According to a press release issued by Netflix India, the film is centered on the "trials and tribulations of contemporary modern day relationships" and it will be available to 139 million Netflix members across the globe.

Madhu Chopra, who has jointly produced Firebrand along with her daughter Priyanka, also spoke about the film's exclusive premiere on Netflix. "Firebrand is packaged with a gripping, a powerful narrative along with an ensemble of talented actors and we are truly excited that this story will reach millions of diverse Netflix members," Madhu Chopra said in a statement.

Priyanka Chopra has backed several regional films such as Ventilator, Kaay Re Rascala, Pahuna, Bhoga Khirikee, Pahuna: The Little Visitors and Paani among others as a producer.

Priyanka Chopra's line-up of films includes Hollywood film Isn't It Romantic?, co-starring Liam Hemsworth and Adam DeVine. Isn't It Romantic? will release on Netflix in India on February 28, just a week after it will release in American theaters. In terms of Bollywood, Priyanka Chopra has The Sky Is Pink, co-starring Farhan Akhtar and Zaira Wasim.