After Viral Pic With Nick Jonas, Priyanka Chopra Discloses Who 'Mystery Photographer' Is

After Priyanka Chopra shared this picture of herself and Nick Jonas, the Internet wanted to know who clicked it 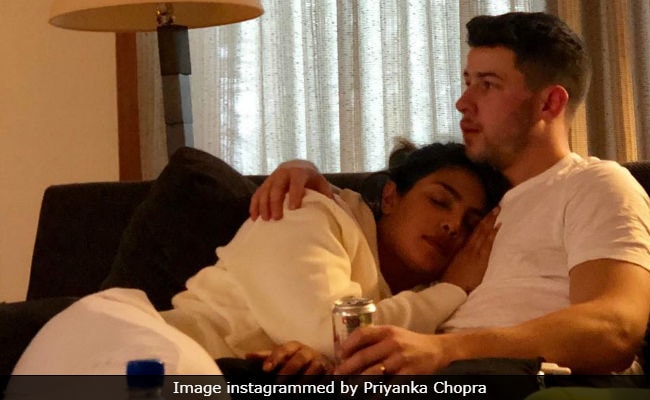 Priyanka Chopra revealed that the 'mystery photographer' (the Internet so keenly wanted to know about) of the viral photo, featuring her and Nick Jonas from a cosy Super Bowl Sunday, is her cousin Divya Sarkisian. Two days after she posted the picture on Instagram, Priyanka added in the comments section: "LOL. I guess people need to know. Thank you, for capturing me sleeping through the Super Bowl, Divya Sarkisian." After Priyanka shared a picture of herself and Nick Jonas, Instagram users bombarded the comments sections with remarks such as: "Photographer ghar par hi rehta hai kya?" and "Who clicked the picture, though?" On her own Instagram page, Divya Sarkisian has shared more pictures of Priyanka's Super Bowl weekend well-spent with Nick Jonas and family.

And here's what Priyanka Chopra wrote later in the comments section:

Priyanka Chopra married singer Nick Jonas in a lavish destination wedding in Jodhpur's Umaid Bhawan Palace. After exchanging the wedding vows in a Christian ceremony on December 1, Priyanka and Nick married as per Hindu traditions on December 2.

After the wedding, Priyanka Chopra and Nick Jonas spent Christmas with their family in London and then the New Year's in Switzerland. After a short trip to the Caribbean islands, Priyanka and Nick resumed life as usual in Los Angeles. Recently, Nick's parents also hosted a reception for their daughter-in-law in North Carolina.

As of now, Priyanka is looking forward to the release of Isn't It Romantic?, her third Hollywood film while her Bollywood project The Sky Is Pink is in work-in-progress stage. The Sky Is Pink, directed by Shonali Bose, also stars Farhan Akhtar and Zaira Wasim.