What Priyanka Chopra Said On The Ellen Show About Her Wedding: 'Mom Was Upset With Me The Whole Time' 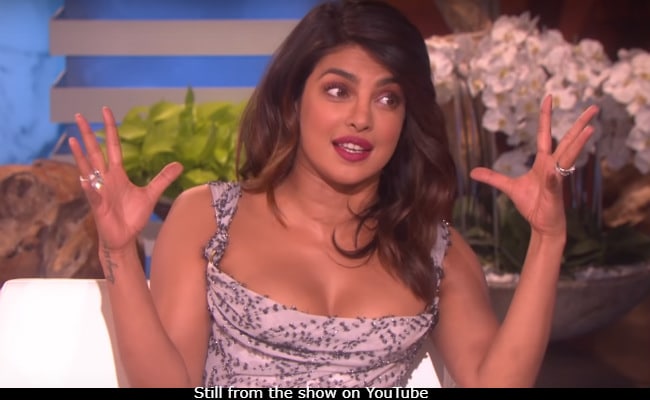 Priyanka Chopra has a history of downing shots on The Ellen DeGeneres Show and that's just how she started the recent episode. This is the 36-year-old actress' first appearance on the show after her wedding and just like all of us, Ellen DeGeneres was also pretty curious about Priyanka and Nick Jonas' big fat wedding but when she learnt about the guest list, the only thing she could say was: "Super intimate with 200 people!" Priyanka explained: "Usually Indian weddings are like thousand people at least. We had only 200 because both of us have giant families... We just wanted to keep it super intimate, about just family."

But apparently, Priyanka's mother Madhu Chopra wasn't too happy with the 200-only-guest list. "For an Indian family and an Indian wedding, that's less. My mother was so upset with me the whole time that she was like 'I need to have another party for the 150 thousand people I know. How can I not invite my jeweller, how can I not invite my hairdresser? So this was the whole conversation," Priyanka told Ellen on the show. Priyanka Chopra and Nick Jonas had a destination wedding in Jodhpur in December.

We know that Nick's first move was to DM Priyanka on Twitter but what we didn't know was that they did their research well before beginning to date. Priyanka said before they started dating, Priyanka didn't follow the Jonas brothers' music and neither was he aware of her celebrity status in India. So, they did this: "Nick and I both didn't know much about each other. So we did a show-and-tell before we started dating, where we like showed each other our work from when we were younger. Embarrassing stuff, the horrible things, it was great and that's how we got to know each other."

Priyanka also revealed why she readily responded to Nick's DM on Twitter: "I was like just text me. Because I had seen Close by then, because I was like wow... wowzaa... It shocks me that how he's not been corrupted... he's family driven, he's all about his parents. It's just really nice and sweet."

On the show, Ellen also revealed that once she let Nick Jonas "live in my house." She said: "Nick lived in my condo, I was his landlord."

Ellen also got Priyanka and Nick a wedding gift: "I got you a wedding gift and you'll are gonna love. I don't know which home you are going to hang it in because I know you have a couple of places," said Ellen and we'll just let you take a look at what the gift actually was.

Priyanka Chopra was on The Ellen DeGeneres Show to promote her third Hollywood film Isn't It Romantic?, in which she co-stars with Rebel Wilson, Liam Hemsworth and Adam DeVine. The film releases in the US on February 13 and will be available on Netflix India starting February 28.