We can't wait to watch the fun-filled episode 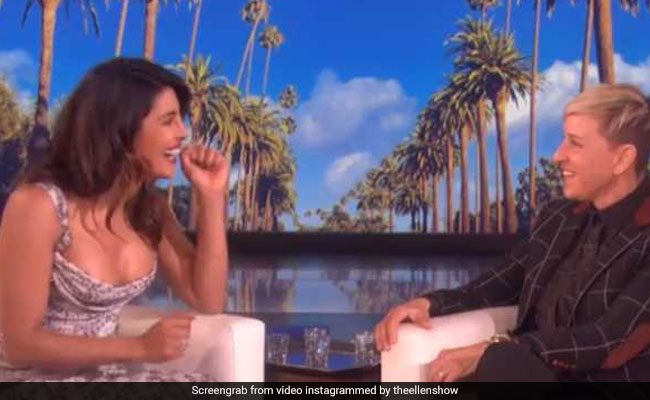 Priyanka Chopra made her second appearance on the popular American talk show The Ellen DeGeneres Show, wherein she spilled the beans about her and Nick Jonas' "millennial" love story. We got a glimpse of the fun-filled episode through a promo video, which was shared on the official Instagram account of The Ellen Show. In the short video, Priyanka Chopra can be seen telling the show's host Ellen DeGeneres how her husband Nick Jonas directly messaged her on Twitter and told her that they should connect. In the short video clip, Priyanka can be heard saying, "He DMed me actually. So millennial of us! He DMed me on Twitter, saying: 'I've heard we should connect and uh... I've heard from common friends that we should meet. What do you think about that? I was like, 'just text me'."

Tomorrow, @PriyankaChopra tells me how her husband @NickJonas slid into her DMs.

Priyanka also gave her fans a sneak peek of her look for the show on her Instagram profile and wrote: "Ready for ya at The Ellen Show - tune in tomorrow!" Priyanka Chopra attended the Ellen DeGeneres Show as a part of her upcoming Hollywood film Isn't It Romantic?'s promotional activities. The 36-year-old actress earlier made an appearance on the show in the year 2016, before the release of her Hollywood debut film Baywatch.

Ready for ya @theellenshow - tune in tomorrow! #isntitromantic

Priyanka Chopra became a household name in the US after she played the role of an FBI agent named Alex Parrish in the American television series Quantico. Priyanka also featured in A Kid Like Jake, co-starring Jim Parsons and Clarie Danes. Priyanka Chopra's next Bollywood release is Shonali Bose's The Sky Is Pink, co-starring Farhan Akhtar and Zaira Wasim.