Yet Another Pic From Priyanka Chopra And Nick Jonas Wedding, Courtesy Anusha Dandekar 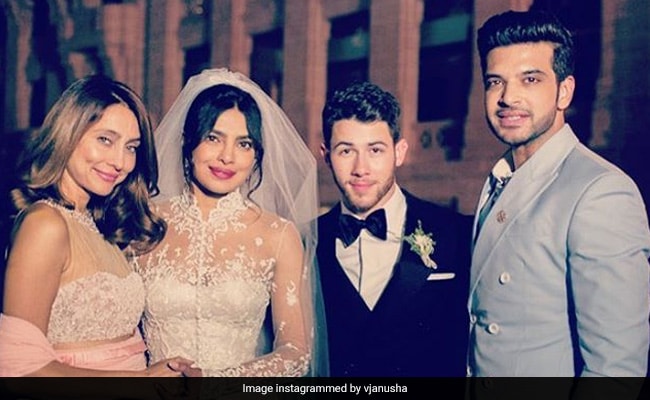 VJ Anusha Dandekar, who is a very close friend of actress Priyanka Chopra, shared a throwback picture from her big fat wedding on her Instagram timeline on Wednesday. The picture shared by Anusha is from the actress' Christian wedding ceremony. The picture features the newlyweds Priyanka and Nick standing next to Anusha and her boyfriend Karan Kundra. "Once upon a time, there was a real life, beautiful fairy tale," Anusha captioned the picture. Priyanka Chopra married Nick Jonas at Jodhpur's Umaid Bhawan Palace in December. Priyanka and Nick's Christian wedding on December 1 was followed by a Hindu wedding ceremony on December 2. Priyanka wore a Ralph Lauren gown for her Christian wedding.

Once upon a time... there was a real life, beautiful fairy tale...

Earlier in the day, Parineeti Chopra had shared a photo from Priyanka and Nick's haldi ceremony on her Instagram stories. In the picture, Parineeti can be seen applying haldi on jiju Nick Jonas' face. On Tuesday, Parineeti had shared another picture from the mehendi ceremony, which featured Priyanka with her bridesmaids.

Priyanka Chopra and Nick Jonas recently returned to Los Angeles after their Caribbean honeymoon. After celebrating Christmas in London, Nick and Priyanka along with their families travelled to Switzerland for New Year's. After the long vacation, Priyanka and Nick travelled to the Caribbean while their families returned to the US. Nick Jonas and Priyanka Chopra kept their fans updated with several photos and videos from their trip on their respective Instagram timeline.

Meanwhile, Priyanka Chopra's only Bollywood project is The Sky Is Pink, directed by Shonali Bose and co-starring Farhan Akhtar and Zaira Wasim.