This star-studded picture will make you smile and how 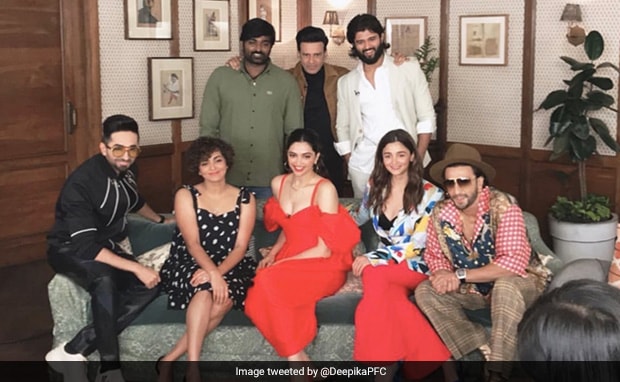 This pic is a treat for all the Bollywood lovers. (Image courtesy: DeepikaPFC )

Attention, folks! We assure you that this blockbuster picture will be worth you attention. Why, you ask? Well it features some of biggest stars from the Bollywood as well as the Southern film industry. No, it is not a throwback picture. It is a recent photograph which has put social media in a state of frenzy and TBH, we are not surprised at all, given the number of stars it features. The aforementioned photograph features Deepika Padukone, Ranveer Singh, Alia Bhatt, Ayushmann Khurrana and Manoj Bajpayee. Wait, the list doesn't end here. The picture also includes Arjun Reddy star Vijay Deverakonda, Tamil star Vijay Sethupathi and Malayalam actor Parvathy Thiruvothu. Phew! The picture happens to be from a roundtable that was attended by all the actors and it has been trending incessantly.

The picture has been curated by several fan clubs on social media. Take a look at the picture, you can thank us later.

Deepika Padukone and Ranveer Singh are celebrating their first wedding anniversary as we speak. In order to make their day more special, the couple visited the Tirumala Tirupati Temple in Andhra Pradesh. Deepika Padukone shared a picture from their anniversary on Instagram, on Thursday and wrote: "As we celebrate our first wedding anniversary, we seek the blessings of Lord Venkateswara. Thank you all for your love, prayers and good wishes."

As we celebrate our first wedding anniversary,we seek the blessings of Lord Venkateswara.Thank You all for your love,prayers and good wishes! @ranveersingh

Ayushmann Khurrana was last seen in Bala, co-starring Bhumi Pednekar and Yami Gautam, which has collected over Rs 66.93 crore within six days of its release. The actor has films like Gulabo Sitabo and Shubh Mangal Zyada Saavdhan in the pipeline.

Vijay Deverakonda is Telugu superstar, who made his debut with the 2011 film Nuvvila. However, his breakout performance was in the 2016 film Pelli Choopulu. He is best-known for his performances in films like Sandeep Reddy Vanga's Arjun Reddy, Ye Mantram Vesave, Mahanati, Nadigaiyar Thilagam and Geetha Govindam to name a few. On the work front, the actor was last seen in Dear Comrade.