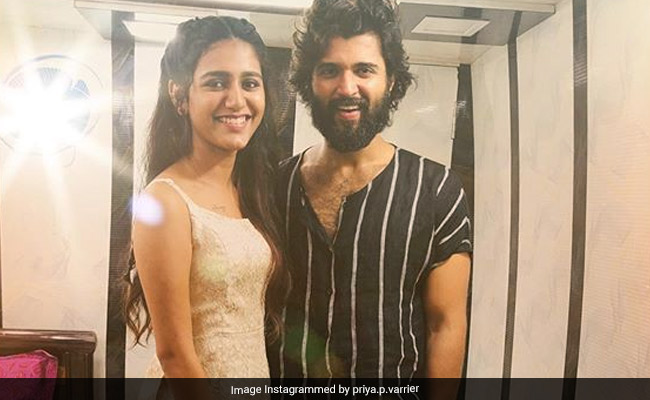 Priya Prakash Varrier occupied a top spot on Thursday's list of trends after she shared a picture with Vijay Deverakonda on her Instagram profile. In her post, the 19-year-old actress expressed her admiration for the Arjun Reddy star and her smile says it all. Giving her fans a glimpse of her fan girl moment, Priya captioned the post in Telugu and wrote: "Nuvvante naaku chala ishtam," which means "I like you so much." The picture is going insanely viral on social media and we are not surprised at all (keeping into consideration the massive popularity of both the actors).

Priya Prakash Varrier shared the image with her 7.1 million followers on Instagram, of which over 5 lakh fans have liked it. Checkout the viral picture here:

Priya Prakash Varrier became an overnight sensation after she featured in the Manikya Malaraya Poovi video from the film Oru Adaar Love. The video shows the actress dressed in school uniform, winking at a fellow student, who is instantly floored by her. The video sent the entire Internet into a meltdown. The actress will soon make her Bollywood debut with the controversial film Sridevi Bungalow.

Vijay Deverakonda is Telugu superstar, who made his debut with the 2011 film Nuvvila. However, his breakout performance was in the 2016 film Pelli Choopulu. He is best-known for his performances in films like Sandeep Reddy Vanga's Arjun Reddy, Ye Mantram Vesave, Mahanati, Nadigaiyar Thilagam and Geetha Govindam to name a few. On the work front, the actor was last seen in Dear Comrade.