Just another post on Saturday, in which Amitabh Bachchan wrote about his daughter Shweta Nanda 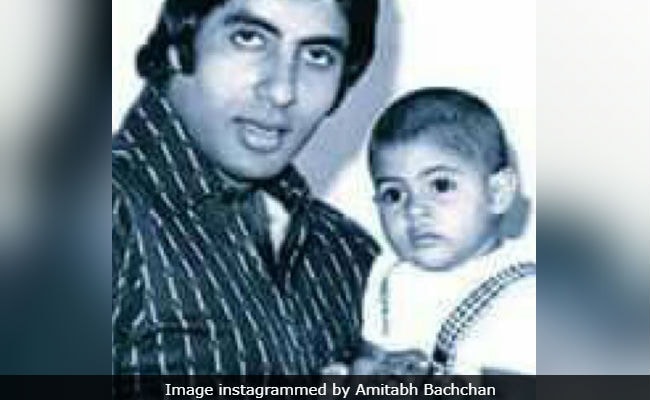 New Delhi: Amitabh Bachchan's latest Instagram post is cuteness overloaded and no, Mr Bachchan did not post a picture of his granddaughter Aaradhya Bachchan. In fact, it was a picture collage of his daughter Shweta Nanda's 'then and now' photos. The 75-year-old actor captioned it: "I held her hand then. I hold it now and shall ever do so. Shweta, my first born." On the left, the father-daughter duo can be seen holding hands in the greyscale picture when Shewta was pint-sized. It is beautifully juxtaposed with a recent photograph of Big B and Sweta walking in corridor holding hands. Mr Bachchan shared the post with his 8.9 million followers and it has over 3 lakh likes. The comments section was flooded with remarks like "sweet" and "adorable."

Shweta Nanda is often spotted accompanying her family at public events. She was recently seen at Sonam Kapoor's reception in Mumbai, where she danced her heart out on the dance floor. She made an appearance in an Abu Jani and Sandeep Khosla red and golden lehenga.

Promoted
Listen to the latest songs, only on JioSaavn.com
Shweta Nanda married businessman Nikhil Nanda in 1997 and they have a 21-year-old daughter Navya Naveli and a 17-year-old son Agastya Nanda.

Amitabh Bachchan was last seen in 102 Not Out, where he played a 102 year-old father to a 75-year-old man (played by Rishi Kapoor). He will next be seen in Thugs of Hindostan, which also stars Aamir Khan, Katrina Kaif and Fatima Sana Shaikh. After that, Amitabh Bachcha will start filming Ayan Mukerji's Brahmastra, along with Ranbir Kapoor and Alia Bhatt.