"This is to the last thing you two have in common - Dil Bechara," wrote Sara Ali Khan 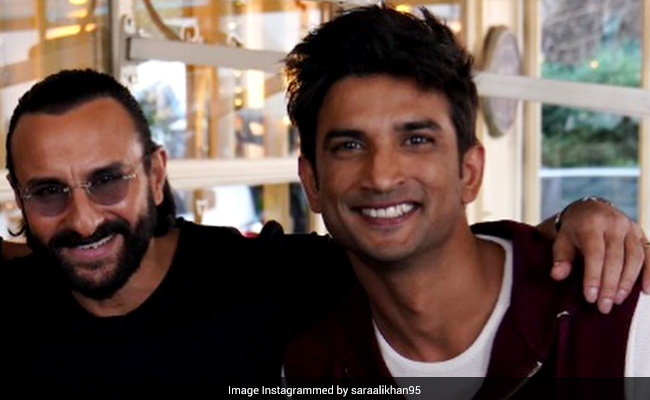 Sushant Singh Rajput's last film Dil Bechara is streaming on OTT platform Disney+Hotstar as we speak. To celebrate the late actor's last film, his Kedarnath co-star Sara Ali Khan, shared a picture of the film's lead actor Sushant along with his co-star (and Sara's father) Saif Ali Khan and revealed what was common between the "two gentlemen." Sara wrote in her post: "The only two gentlemen that have spoken to me about Sartre, Van Gogh, telescopes and constellations, guitars, the Northern Lights, cricket, Pink Floyd, Nusrat Saab and acting techniques." She signed off her note saying, "This is to the last thing you two have in common - Dil Bechara. Now on Disney+ Hotstar."

The only two gentlemen that have spoken to me about Sartre, Van Gogh, telescopes and constellations, guitars, The Northern Lights, cricket, Pink Floyd, Nusrat Saab and acting techniques. This is to the last thing you two have in common- #DilBechara Now on Disney Hotstar!

Saif Ali Khan, who worked with Sushant Singh Rajput for the first and the only time, shared his experience in an interview earlier this month, where he said that the Kai Po Che! actor "had a bright future." The New Indian Express quoted the actor as saying, "I thought he had a bright future. He was polite to me and appreciated my guest appearance in the film. He wanted to talk about many topics like astronomy and philosophy. I got the feeling he was brighter than I was."

Sara Ali Khan, who made her Bollywood debut opposite Sushant Singh Rajput in the 2018 film Kedarnath, remembered the actor by sharing a throwback picture from the sets of the Abhishek Kapoor-directed film with a broken heart emoticon. Sushant Singh Rajput was found dead at home in Mumbai on June 14 and police say it was by suicide.

Dil Bechara is inspired by John Green's book The Fault In Our Stars, which was also adapted into Hollywood film with the same name and it featured Shailene Woodley and Ansel Elgort in the lead roles. The film has been directed by casting director Mukesh Chhabra, who is making his debut as a director with the movie. Dil Bechara also stars Sanjana Sanghi and the film's music has been composed by AR Rahman.