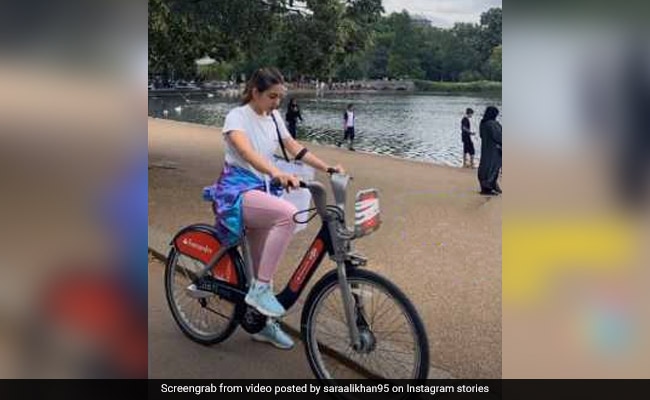 Another day, another fabulous picture from Sara Ali Khan's London vacation. Just when we thought pictures from Sara's holiday couldn't get any better, the Simmba actress posted more pictures on her Instagram stories. On Wednesday, the 23-year-old actress shared a picture of herself riding a bicycle in Hyde Park, London. Sara was dressed at her quirky best during her day out in London. In the photograph, she can be seen wearing a plain white t-shirt, with a pair of pink track pants and a blue jacket tied around her waist. The picture was originally shared by Sara on her Instagram profile and the caption on it read: "FOMO (Fear Of Missing Out)." The photograph was later curated by several fan clubs deducted to the actress.

Sara Ali Khan has been actively sharing pictures from her London vacation on her Instagram profile. Sara has been accompanied by her brother Ibrahim Ali Khan and their mother Amrita Singh. A picture of the brother-sister duo standing near a phone booth in London went insanely viral on social media on Tuesday. Take a look at the post here:

If we had to describe Sara's vacation pictures, we would call them envy-inducing. Don't believe us? Take a look, you can thanks us later:

I smile because you're my brother ...I laugh because there's nothing you can do about it

Sara's line-up of films includes an untitled film directed by Imtiaz Ali, in which she will star opposite Kartik Aaryan. She also has the remake of Coolie No 1 in the pipeline, co-starring Varun Dhawan.