Sara Ali Khan Has Always Been The Spunkiest Of Them All. LOL Proof Here 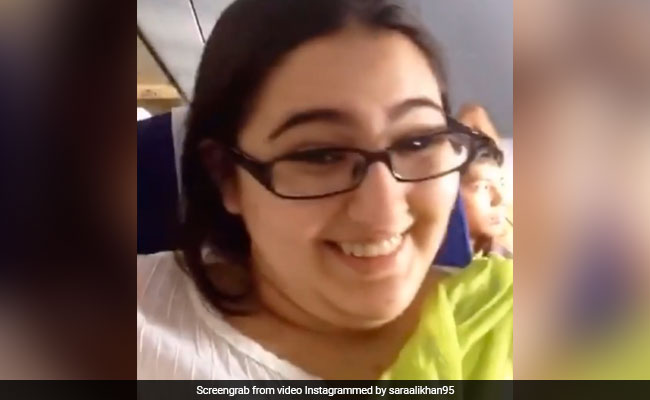 Leave it to Sara Ali Khan to entertain her Instafam with fun videos and pictures and the reason we brought this up today is because the 24-year-old actress shared a video on Instagram profile on Tuesday, which reflects her fun side. The goofy video happens to be a throwback from the time when Sara had not stepped into Bollywood. A few years later, Sara went through a drastic transformation. Sara can be seen having fun with her friends as the song Sar Jo Tera Chakraye plays in the backdrop. Sara looks almost unrecognisable in the video. Sara captioned the post: "Presenting sara ka sara Sara. Let's make 'light' of what it was... Let's also make it lighter than what it was. Video and transformation credit - Namrata Purohit."

Presenting Sara ka Sara Sara Let's make 'light' of what it was... Let's also make it lighter than what it was Video and transformation credit: @namratapurohit

Sara Ali Khan, a regular at the gym, has quite a bit of a reputation as a fitness enthusiast. She is frequently seen working out with Pilates instructor Namrata Purohit. Check out some of the videos here:

Take care of your body. It's the only place you have to live. @namratapurohit thank you for teaching me how to love my body, feed my soul and calm my nerves. #balance #positivevibes #loveyourself #beyourself @pumaindia

The Simmba actress opened up about her weight loss and transformation journey during Karan Johar's talk show Koffee With Karan. During the show, Karan Johar played two clips featuring Sara Ali Khan from when she was studying in Columbia University. She weighed 96 kilos then. Speaking of which, Sara said: "I had PCOD. I still do and because of that I think I put on the amount of weight that I did."

On the work front, Sara Ali Khan's line-up of films includes David Dhawan's Coolie No 1 remake, co-starring Varun Dhawan. She also has the remake of Love Aaj Kal in the pipeline. The film has been directed by Imtiaz Ali and it features Kartik Aaryan. Sara made her Bollywood debut with the 2018 film Kedarnath.