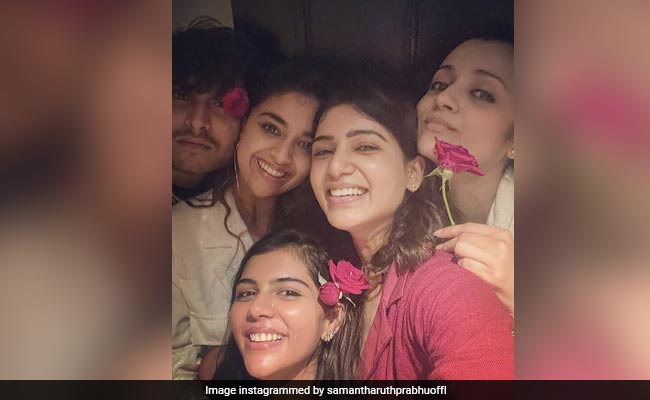 Samantha Ruth Prabhu is always on the go. As she moves from one successful movie to another, the actress also knows how to take a breath and have a good time, once in a while. It looks that the week that went by was exactly about this, as the actress was seen slowing down and spending some time in the company of her friends and pets. She also took the time to visit the Lord Venkateshwara Temple in Tirumala, Tirupati, on Saturday. The 34-year-old took us through the past week with a series of pictures that caught her in various moods.

In the first of several pictures posted on Instagram, Samantha Ruth Prabhu is seen chilling with her colleagues and friends, Trisha Krishnan, Keerthy Suresh, and Kalyani Priyadarshan. With a rose tucked behind the ears, Samantha and Keerthy also made a short goofy video.

The pictures of the get-together were followed by images of Samantha Ruth Prabhu's trip to Tirupati. And after the holy visit, it was time for the actress to cuddle with her two pet dogs, her photos suggest. While one of the dogs is seen sleeping on one side of the bed, the pup is seen snuggling to Samantha's neck in the photo. Also, do not miss the tug of war between the two dogs for what appears to be an old shoe.

Samantha concluded the photo series with an image of a gratitude journal that was titled “365 days of gratitude.”

Along with the photos, Samantha Ruth Prabhu wrote, “The week that was.” Tagging Trisha Krishnan, Keerthy Suresh and Kalyani Priyadarshan, Samantha wrote, “Thank you, for such an amazing evening.”

You can see the images here:

Samantha Ruth Prabhu only recently welcomed her second dog, Saasha. Sharing an image of her sitting with her two pets, Samantha said that while she had spent the day cleaning up after her new pup, she was elated to have him around.

She wrote, “Cleaned the 19th puddle of pee today and it's only 9 am. But the cherry on the cake has to be the moment that I sat down with my coffee thinking 5 minutes of calm now, only to notice one tiny little monster running with her dripping pee pad all around the house… and suddenly my coffee isn't strong enough. Say hello to Saasha.”

A few days ago, Samantha Ruth Prabhu shared another image of Saasha sleeping on Samantha's workout mat after she had exercised. The 34-year-old wrote in the caption, “In case you hadn't noticed.”

Samantha Ruth Prabhu was last seen in the second season of the web series Family Man. Her upcoming releases include Shaakuntalam and Kaathu Vaakula Rendu Kaadhal.