Hey Keerthy Suresh, can we swap our Monday moods please? 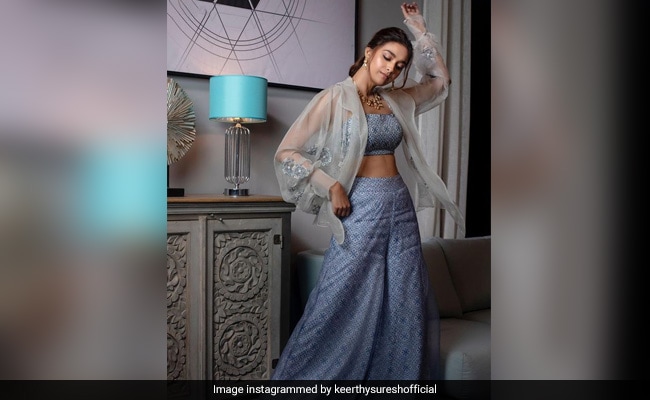 Turns out Monday blues might not be a problem for Keerthy Suresh and her latest Instagram post clearly reflects why. The actress shared an Instagram post on Monday, in which she can be seen posing in a co-ord set. She threw over a sheer cape and what's not to love about her OOTD? Keerthy picked an ice blue outfit from the shelves of U/A. She accessorised it with jewelry by Jos Alukkas. The actress summed up her current mood with these words: "My Monday blues," adding a blue heart emoji and the hashtag #MondayBlues. Keerthy's post was filled up with heart emojis from fans. The picture are trending big time on social media.

Last week, Keerthy Suresh shared the first poster of her forthcoming film Annaatthe, co-starring Rajinikanth, on social media and she wrote: "The first look we've all been waiting for has finally arrived and I can't keep calm." She added, "Here's to an adventurous journey ahead."

Without much ado, see the first poster of Annaatthe here:

Keerthy Suresh, who won a National Award for her performance in the Telugu film Mahanati, was seen in the thriller Penguin, which released on Amazon Prime. The actress will next be seen in the Malayalam film Marakkar: Arabikadalinte Simham, featuring Mohanlal.

Keerthy, the daughter of producer G Suresh Kumar and actress Menaka, featured as a child artiste in several films. However, her first lead role was in the 2013 Malayalam film Geethaanjali<. She later starred in films like Ring Master, Manmadhudu 2, Sandakozhi 2, Idhu Enna Maayam, Rajini Murugan, Remo and Nenu Sailaja, to name a few.