In Keerthy Suresh's Yoga Routine, A Glimpse Of Her "Warrior Spirit"

"Practicing and progressing balance of a sensitive soul and a warrior spirit," wrote Keerthy Suresh 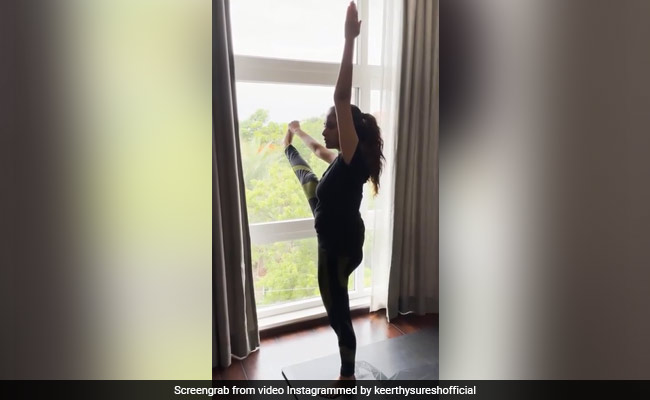 Keerthy Suresh in a still from her yoga video (courtesy keerthysureshofficial)

South actress Keerthy Suresh perfected her skills in the "art of balance" with a yoga session on Tuesday. The 28-year-old actress shared a glimpse of her fitness routine on Instagram and looks like she's a fan of yoga. Having chosen the yoga way of life, Keerthy Suresh added that: "It's not always just Monday motivation, sometimes it's Tuesday." In her yoga routine video, Keerthy can be seen practicing different asanas - in the caption, she wrote about how they help her declutter clouding thoughts: "Four different asanas and a million thoughts shut for a few moments on a single leg. Practicing and progressing balance of a sensitive soul and a warrior spirit."

On International Yoga Day in June, Keerthy Suresh dedicated this post to her "guru", for helping her on the path to fitness: "Thanks to my guru for taking me through this beautiful journey."

Keerthy Suresh's Instagram is filled with snippets of her yoga session, all of which she shared with rather interesting thoughts of the day: "Some yoga in the day keeps the tensions away," read one while another said: "The calm that comes with my daily yoga routine!"

Keerthy Suresh is best known for starring in films such as Manmadhudu 2, Sandakozhi 2, Mahanati, Thodari and Geethaanjali, among others. She was last seen in Telugu movie Rang De, which released earlier this year. Keerthy Suresh has an impressive line-up of upcoming films such as Good Luck Sakhi, Marakkar: Arabikadalinte Simham, Annaatthe and Sarkaru Vaari Paata.