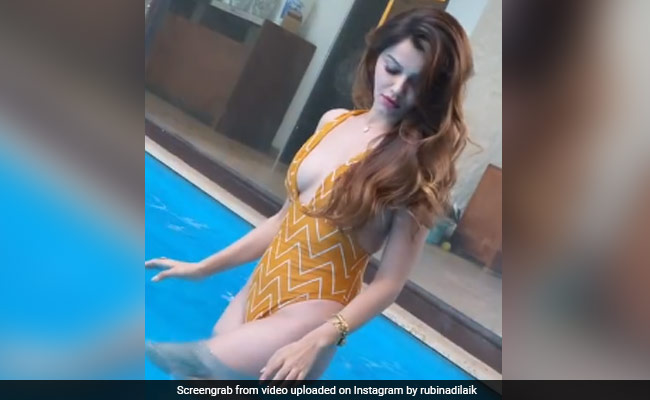 Rubina Dilaik in a still from the video.(Image courtesy: rubinadilaik)

TV actress Rubina Dilaik, on Sunday, treated her fans to a new fabulous pool video of herself. The video looks like it is from one of the recent photo shoots of the actress. Rubina Dilaik can be seen dressed in a stunning yellow swimsuit in the video. As the video begins Rubina Dilaik can be seen stepping inside the swimming pool. She can later be seen posing for the cameras in the swimming pool. Rubina looks as gorgeous as ever in the new video. Sharing the video on Instagram, Rubina Dilaik kept the caption of the post simple and only added a water droplet emoji.

Rubina's post received many comments from her fans on social media. Among others Rahul Mahajan also dropped a comment on the actress' post. "Wow," Rahul Mahajan wrote and added several fire emojis to the comment.

This isn't the first time that Rubina has made heads turn with her fabulous swimming pool look. Last week, she sent the Internet into a tizzy as she dropped another picture of herself clicked by the swimming pool. Rubina can be seen sporting blue bikini in the picture. "Longing for a vacation," she wrote in the caption of the post. She also shared that the picture was clicked by her husband, actor Abhinav Shukla.

Rubina Dilaik is known for her work in TV shows like Choti Bahu, Sasural Simar Ka and Shakti - Astitva Ke Ehsaas Ki. She also appeared in the recent season of reality TV show Bigg Boss and emerged as the winner.