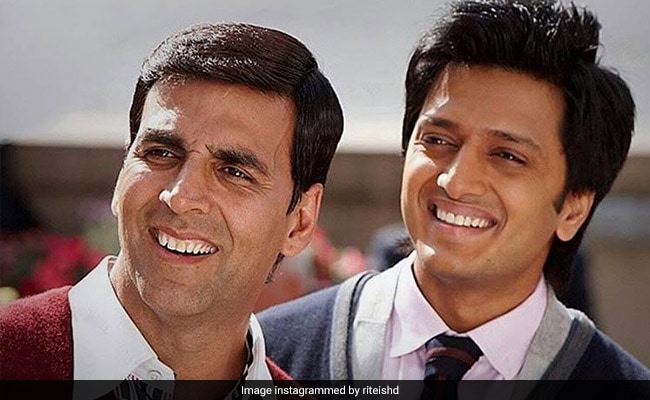 Riteish Deshmukh's latest Twitter post will surely make you laugh (P.S if you are following the #bottlecapchallenge). No, we are not exaggerating. The actor, who is also known for pranks and witty posts, frequently involves his Bollywood friends in his jokes and his recent tweet is not an exception. This time, it's Akshay Kumar. The Khiladi 786 actor recently shared a video on Twitter showing his attempt to complete the "Bottle Cap Challenge," which is trending on the Internet for days and is now making its way to India as well. However, Riteish Deshmukh claims it's him not Akshay in the video. Surprised right?

Sharing the video Akshay Kumar posted, where he could be seen nailing the challenge, Riteish joked that it's him who has completed the challenge wearing Akshay's mask. His caption read: "I couldn't resist either! That's my #bottlecapchallange with an Akshay Kumar mask... Beware, he may claim it's him... As a good friend I will allow him that much! My next challenge video is with a Tiger Shroff mask..."

Before you watch the video, here's what you need to know about the challenge. As per the Bottle Cap Challenge, one has to unscrew the bottle cap with a flying kick without as much as touching the bottle.

I couldn't resist either!!!
That's my #bottlecapchallange with an @akshaykumar mask... beware he may claim it's him.... as a good friend I will allow him that much !!! My next challenge video is with a @iTIGERSHROFF mask... pic.twitter.com/gGb0Na56c7

It seems like the Bottle Cap Challenge was apparently started by taekwondo instructor and fighter Farabi Davletchin on Instagram but it went viral after UFC Featherweight champion Max Holloway, who in his tweet last month, challenged singer John Mayer to try it out. John Mayer did it but also tagged Furious 7 star Jason Statham in turn. Sharing his video of completing the challenge, Jason wrote: "This thing landed on my head from John Mayer but will quickly go to a couple of fellas we've seen do push ups badly."

Take a look at the aforementioned videos:

Be curious my friends! #challengeaccepted#bottlecapchallenge Passing this on to our guy @JohnMayer .... hey John if you can't complete this challenge @erlsn and I decided you have to come to Hawaii after your tour and kick it with us until you complete it! pic.twitter.com/gLWn0dpOzV

Riteish Deshmukh and Akshay Kumar, who have previously shared screen space in films such as Heyy Babyy (2007), Entertainment (2014), Housefull (2010), Housefull 2 (2012), Housefull 3 (2016), will next be seen together in Housefull 4, which is slated to release on Diwali this year. Apart from Riteish and Akshay, the film will also feature Bobby Deol, Kriti Sanon, Kriti Kharbanda, Pooja Hegde, Rana Daggubati, Nawazuddin Siddiqui and Chunky Pandey.