Celebs Are Kicking Caps Off Bottles, Thanks To New Viral Challenge

The Bottle Cap Challenge is the latest Internet craze 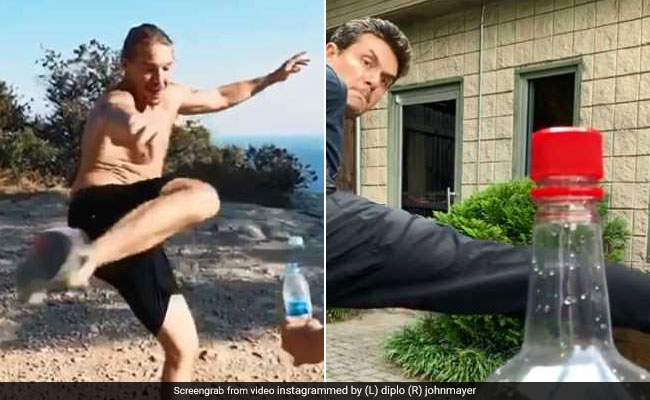 Diplo and John Mayer are among the celebs who have tried the Bottle Cap Challenge.

After the Kiki Challenge madness of summer 2018, a new viral challenge seems to be taking over the Internet this year. The 'Bottle Cap Challenge' has participants attempting to unscrew a cap from a bottle with their foot in the middle of a kick - without knocking the bottle down. The challenge, which has seen celebrities like John Mayer and Jason Statham trying their hand (or foot) at it, was apparently kick started by taekwondo instructor and fighter Farabi Davletchin on Instagram. It was then picked up by Max Holloway, current UFC Featherweight champion, who has been credited for its popularity.

Be curious my friends! #challengeaccepted#bottlecapchallenge Passing this on to our guy @JohnMayer …. hey John if you can't complete this challenge @erlsn and I decided you have to come to Hawaii after your tour and kick it with us until you complete it! ???????????? ????⚡???? ???? pic.twitter.com/gLWn0dpOzV

Max Holloway, in turn, tagged singer John Mayer to try the Bottle Cap Challenge. Though not a martial artist like people trying the challenge before him, John Mayer managed to nail it. Take a look at his video below:

American DJ Diplo tried the challenge too and posted a cheeky caption with his video, calling out John Mayer for not requesting him to do the challenge.

Since no one requested me to do this (@johnmayer ) and also since no one thinks I'm good at anything except pushing button on stage .. here is evidence that I also do karate. I challenge Prince Harry and Meghan Markle, Kevin Durant and Obama @sussexroyal @easymoneysniper @barackobama #bottlecapchallenge

The Bottle Cap Challenge craze has also spread to Bollywood, where actor Siddhant Chaturvedi of Gully Boy fame had a go at it, and tagged Ishaan Khatter to try it too. He shared the video on Instagram stories, and you can watch it here.

To pull off the stunt, most people have used a reverse roundhouse kick, also known as a wheel kick or spinning back heel kick, according to NJ.com. Would you try the Bottle Cap Challenge? Let us know using the comments section.