Akshay Kumar nails the Bottle Cap Challenge and how 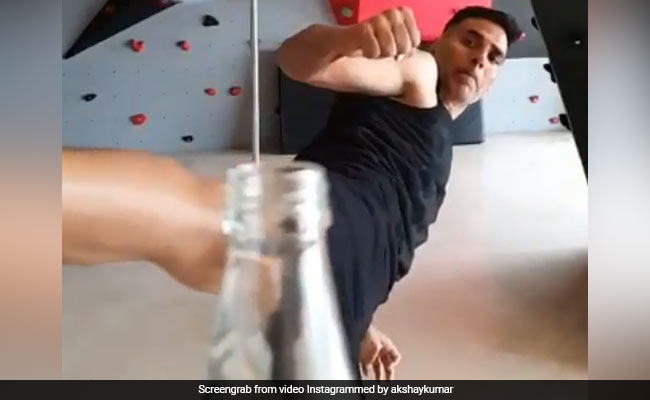 Akshay Kumar in a still from the viral video (courtesy akshaykumar)

News of the new viral challenge - the Bottle Cap Challenge - has reached action rockstar Akshay Kumar and he "couldn't resist" trying his hand (read leg) at it. Before we proceed, here's what you need to know about the new challenge that's keeping celebs around the world occupied. As per the Bottle Cap Challenge, one has to unscrew the bottle cap with a flying kick without as much as touching the bottle. On Wednesday, Akshay Kumar nailed the challenge and Instagrammed a video with the caption: "I couldn't resist," also tagging Hollywood's action superstar Jason Statham, who inspired him to take the challenge. "Inspired by my action idol Jason Statham," he wrote.

Akshay Kumar also attached a Wednesday motivation message to his post as he wrote: "I will repost/retweet the best I see. Come on guys and girls get your bottle out and your legs in the air. Let's do this #FitIndia #WednesdayMotivation."

I couldn't resist #BottleCapChallenge Inspired by my action idol @JasonStatham, I will repost/retweet the Best I see, come on Guys and Girls get your Bottle out and your Legs in the Air, Let's Do This #FitIndia #WednesdayMotivation

Looks like the Bottle Cap Challenge was apparently started by taekwondo instructor and fighter Farabi Davletchin on Instagram but credits for making to go viral apparently go to UFC Featherweight champion Max Holloway, who in his tweet last month challenged singer John Mayer to try it out. John Mayer did it and in tagged Jason Statham in turn. "This thing landed on my head from John Mayer but will quickly go to a couple of fellas we've seen do push ups badly," wrote the Furious 7 star.

Be curious my friends! #challengeaccepted#bottlecapchallenge Passing this on to our guy @JohnMayer .... hey John if you can't complete this challenge @erlsn and I decided you have to come to Hawaii after your tour and kick it with us until you complete it! pic.twitter.com/gLWn0dpOzV