'RIP With Love': Kajol's Tribute To Father-In-Law Veeru Devgan. It's OK To Cry 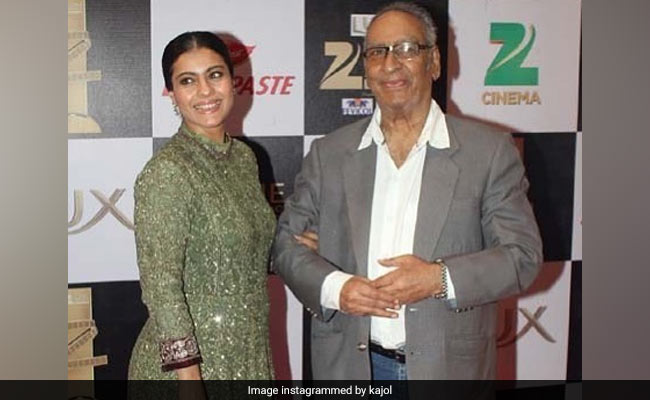 Almost a week after her father-in-law Veeru Devgan's death, Kajol posted a heartfelt eulogy post on her Instagram profile on Tuesday evening. The 44-year-actress shared a throwback picture of herself along with the late action director, in which the duo could be seen smiling with all their hearts, echoing Kajol's caption on the post, which read, "In happier times." In her post, Kajol revealed that the picture was taken during an award ceremony, wherein Mr Devgan was honoured with a Lifetime Achievement Award. Kajol accompanied the picture with an emotional post and wrote: "He won the award for a lifetime of achievement on this day but it took a lifetime to prove. So many people mourn the life of the man but that was a life well lived... RIP with love."

In happier times ... . He won the award for a lifetime of achievement on this day but it took a lifetime to prove. So many people mourn the life of the man but that was a life well lived... RIP with love.

Veeru Devgan died due to age-related health issues on May 27. Mr Devgan's actor son Ajay Devgn performed the last rites at Vile Parle in Mumbai on the same day. Mr Devgan was a veteran action director, who choreographed the action sequences in over 80 Bollywood films, especially in the Nineties.

It takes real fathers to transform their boys into heroes. Started doing stunts at the age of 16, still going strong at 45 And I know one man who will always be proud of me in Heaven My Guru, My Father - Veeru Devgan Two most important lessons he taught me: 1. Be honest with your work and work will be honest with you. 2. Before performing any stunt the most important thing is - SAFETY FIRST. (On Location...Bangkok... Stunt Rehearsals before Akshay performs the actual shot...#sooryavanshi) PS: Please do not try this stunt. All the drivers in the cars are stunt Professionals and the stunts are performed in a controlled environment.

Veeru Devgan is survived by two sons - Ajay and Anil - and a daughter. Ajay Devgn is married to actress Kajol and together they have a son named Yug (8) and a 16-year-old daughter named Nysa, who currently studies in Singapore.

Veeru Devgan was best-known for directing action sequences in classic films such as Mr Natwarlal, Mr India, Shahenshah and Tridev among others. Mr Devgan also directed and produced Ajay, Manisha Koirala and Amitabh Bachchan in the 1999 film Hindustan Ki Kasam.