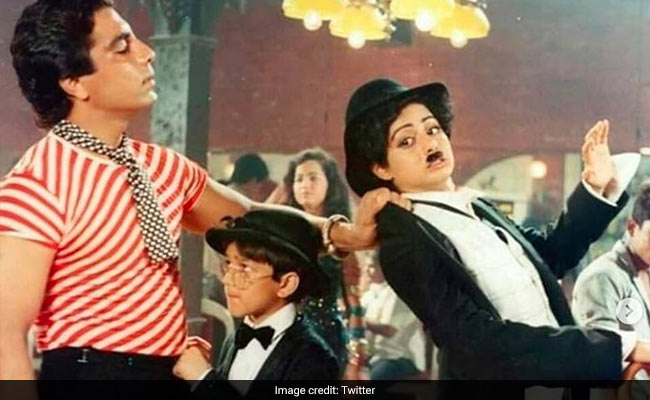 Anil Kapoor, who is etched in our minds as the iconic Mr India from Shekhar Kapur's 1987 movie, dedicated the film's 32nd anniversary to Veeru Devgan, who choreographed the action scenes in the movie. Ajay Devgn's father Veeru Devgan died at the age of 85 on Monday and is remembered for his work in over 80 Bollywood films as an action director. Anil Kapoor, who attended the cinematic legend's funeral on Monday evening, tweeted this on Wednesday: "Mr India was made iconic by its children friendly action scenes and Veeru's Midas touch. I want to dedicate its 32nd anniversary to the man who made these unforgettable moments possible. Veeru Devgan was an amazing man and I'm lucky to have worked with him. He is sorely missed."

Mr India had many iconic fight scenes choreographed by Veeru Devgan, among them a memorable one in which Sridevi, dressed as Charlie Chaplin, remotely beats up goons without moving from her spot - Anil Kapoor's character, the invisible Mr India, really does the beating up.

As Mr India turned 32, this is what Shekhar Kapur shared on the film's never-ending popularity. Mr Kapur had also attended Veeru Devgan's last rites on Monday.

What's with this film !! It's 32 years old today and refuses to age. #mrindiapic.twitter.com/TueEoDkfOw

Produced by Sridevi's husband Boney Kapoor, Mr India is still regarded as Bollywood's first ever sci-fi movie. Sridevi was cast as a feisty journalist with a no-nonsense mantra of life while Anil Kapoor's role was the perfect foil to hers - a violinist in charge of a house full of orphans by day and an invisible vigilante by night. Satish Kaushik, who featured as the house cook Calendar, was also spotted at Veeru Devgan's funeral. The cast of Mr India also included names such as Amrish Puri as the iconic villain Mogambo, Sharat Saxena, Annu Kapoor and Ajit Vachani with Ashok Kumar featuring in a cameo.