As the nation mourns Veeru Devgan's death, here's a look at some of his best work over the years 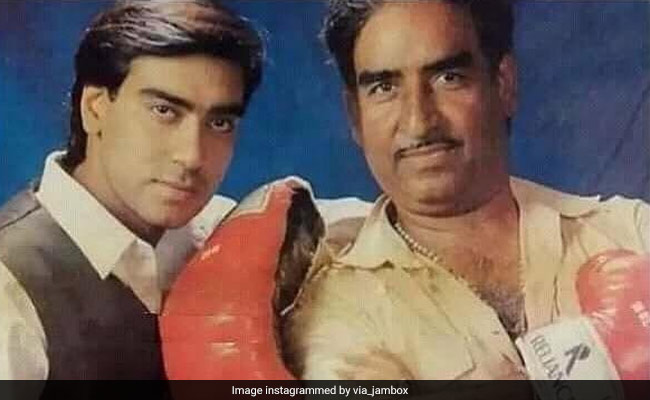 The nation, with a heavy heart, bid adieu to Ajay Devgn's father action choreographer Veeru Devgan, who died after suffering a cardiac arrest on Monday in Mumbai.

The late action director encountered breathing trouble after which he was immediately admitted to Surya Hospital, Santa Cruz. At the hospital, his condition turned critical and he suffered a cardiac arrest.

Veeru Devgan is known for his iconic work in movies like Hindustan Ki Kasam, Mr. India, Roop Ki Rani Choron Ka Raja and Shahenshah, among many others. The renowned stunt director has choreographed action sequences in nearly 80 Bollywood films, with his main work in the 90s.

He made his directorial debut with 1999 film Hindustan Ki Kasam, featuring Ajay Devgn, Amitabh Bachchan, Manisha Koirala and Sushmita Sen. This was his only film as a director. He even produced the movie.

As the nation mourns Veeru Devgan's death, here's a look at some of his best work over the years:

One of the most memorable movies of all times, Mr. India won a million hearts thanks to Sridevi and Anil Kapoor's crackling chemistry. Veeru Devgan worked as the stunt choreographer in the film, which portrays the story of a poor but big-hearted man (played by Anil) who takes orphans to his home. After discovering that his father, who was a renowned scientist, had created a device that would make its user invisible, he fights to save the children and the country from a megalomaniac.

Who doesn't remember Ajay Devgn's iconic entry on two bikes? Well, his father was behind most of the hard work put into the legendary scene. Veeru Devgan worked as a stunt coordinator in the film. The movie marked Ajay''s Bollywood debut and revolves around a young man (Ajay) who despises his father's (Amrish Puri) criminal profession to live a peaceful family life. However, fate has some other plans for him.

Ajay Devgn's entry standing on two bikes is remembered even today and has been recreated in many of his films.

Shahenshah, another masterpiece of Indian cinema! Veeru Devgan worked as a stunt coordinator in the iconic film, which stars Amitabh Bachchan, Amrish Puri, Supriya Pathak, among others. The film revolves around Vijay (Big B) - a corrupt officer by day and a vigilante by night - who strives to make the city crime free.

Devgan directed various action scenes in Ajay Devgn starrer Dilwale. The film went on to become one of the highest grossing Indian movies of 1994 and won several awards. The film revolves around a police officer (Suniel Shetty) who finds out the truth about a mental patient (Ajay Devgn) and helps him bring the perpetrators to justice.

Veeru Devgan did stunt work for major heroes including Dilip Kumar, Dharmendra, Vinod Khanna, Rajesh Khanna, and Jeetendra, among others.

He also handled the action sequences for other films featuring Ajay including Jigar, Diljale, Jaan and Ishq.

His last film as a stunt director was the 1999 movie Gair.

The veteran stunt choreographer has given a definition to fight and action scenes in Indian cinema, his hard work and remarkable contribution will be remembered in the years to come.