Richa Chadha Wishes She Had Been At College With Shah Rukh Khan. Ali Fazal's Reaction 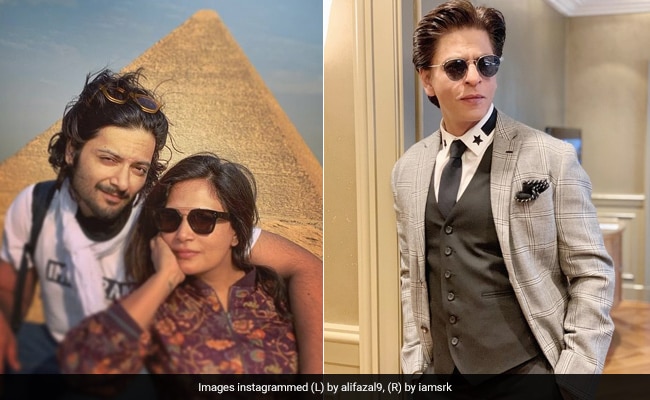 Imagine if Richa Chadha and Shah Rukh Khan studied in the same college, how would that go? We aren't claiming this, these are Richa's thoughts. Before you start scratching your head, we must tell you that the actress recently confessed her love for Shah Rukh on Twitter. While SRK is yet to react to Richa's post, it seems that the tweet has made her beau Ali Fazal jealous. Here's what happened. On Wednesday, Richa participated in Shah Rukh's #AskSRK session on Twitter. She began her tweet by reminding SRK of an old Holi video, which featured the superstar and his wife Gauri Khan.

Richa recently saw the video and it made her think that she would have been great friends with Shah Rukh. Richa also wished that both of them should have been studied in the same college.

"Saw that video of you and your lovely wife dancing on Holi...@iamsrk- thought we might make great friends...we should have been in college together...not a question, just expressing love #AskSRK," Richa wrote in her tweet.

Saw that video of you and your lovely wife dancing on Holi...@iamsrk
-thought we might make great friends,
-we should have been in college together not a question, just expressing lurve #AskSRK

"Why are you guys so cute Ali and Richa?" producer Guneet Monga who noticed their tweets, wrote. Richa replied to her tweet saying, "Hehe."

Coming back to Richa's tweet, it seems that she was talking about filmmaker Subhash Ghai's 2000 Holi party in which Shah Rukh Khan and Gauri Khan were invited. Ghai had tweeted the video last year. In the video, SRK and Gauri can be seen playing Holi and dancing together.

Speaking of Richa Chadha and Ali Fazal, they keep showering love on each other on their respective social media handles. Here are some of their posts:

In terms of work, Richa was featured in the Fukrey series alongside Ali Fazal and will now share screen space with him in the third installment of the Fukrey franchise titled Fukrey 3.