Richa Chadha said: "I definitely do hope to work again with the team again on part 3 of the film" 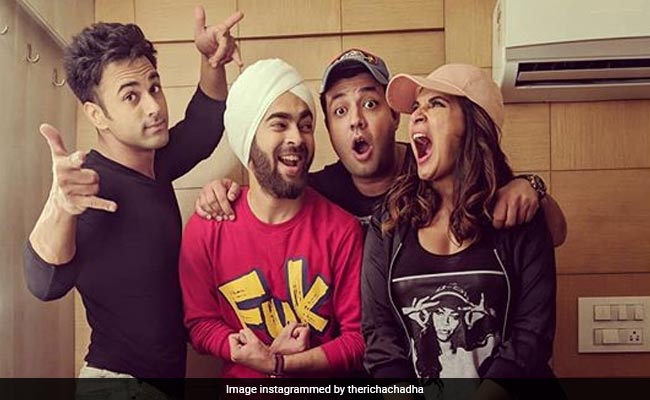 Richa Chadha with the cast of Fukrey (Image courtesy therichachadha)

Actress Richa Chadha, who rose to fame with her character of Bholi Punjaban in the Fukrey franchise, became nostalgic as the second instalment of the franchise Fukrey Returns completed one year of its release on Saturday. Reminiscing about the film's memories, Richa said in a statement: "Fukrey is a very special film. I am personally a huge fan of Bholi. She is brave and extremely intelligent and it has been amazing to play her twice. I have made lifelong friends...thanks to Fukrey. The success the film has had has been surprising and rewarding."

Made such as friends on this one ... Love you guys! @pulkitsamrat @alifazal9 @oyemanjot @fukravarun ... ...? . Have really enjoyed this character of Bholi Punjaban, every aspect of it. She is so committed and efficient in running her illegal business She doesn't think there is a limitation that she is a girl. She's brazen. . . . .

It seems the actress wants to take her Bholi Punjaban character ahead as she wrote to the film's director Mrigdeep Singh Lamba that it's time a third film should be made.

"I definitely do hope to work again with the team again on part 3 of the film, it would be amazing to reunite for the third time. I think we definitely deserve part 3 of Fukrey", she added.

Happy anniversary @mriglamba , @excelmovies ! It's been a year since Fukrey Returns released... @vipulvig . Though now is enough time to get cracking on three, come on director saab! This is the most fun that could be had (our friends made) on a project ! Just missing the fun is all My boys @oyemanjot @pulkitsamrat @fukravarun @alifazal9!

Backed by Excel Entertainment, Fukrey Returns is a sequel to the 2013 hit comedy film Fukrey.