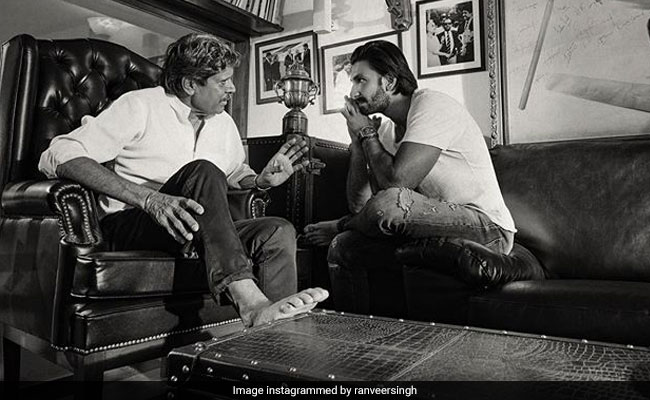 He has played a quirky wedding planner, a street-smart con man, a ruthless invader, a rapper, and now he is diving into the role of real life cricket icon Kapil Dev. Actor Ranveer Singh says playing an icon like the former Indian skipper comes with a set of challenges, which he is well prepared to face. Ranveer has embarked upon the journey of '83, a Bollywood film in which he will be seen as Kapil Dev. Before leaving for London with the 'squad' to begin the shoot, Ranveer told IANS: "I feel prepared and less anxious than I was when I started."

"This is the longest I have prepared for any role. I have been preparing essentially since January, which makes it about six months. I have done three weeks, three and a half weeks, four weeks, six weeks, but six months preparing for a character is unique... But then, it's a unique film in itself," added the actor, who was suited, booted and moustached for the role.

As the 'game' is about to begin, the actor gave an insight into the preparation that has gone into it.

"Playing a living legend poses a unique set of challenges, and your approach to the preparation for that character has to be all the more intensive. And it has been. But at the same time, it has been very rewarding and fulfilling," said Ranveer.

In the course of the "absolutely wonderful" prep for the Kabir Khan-directed film, he says he has learnt a lot about being an athlete, about cricket and about the "iconic cricketer" Kapil Dev.

Ranveer not just trained with Kapil Dev in Dharamsala, but also spent about 10 days with him in Delhi, trying to pick on the nuances to bring out the best possible performance on-screen.

The actor says, "It was a process of taking a lot of tips... Cricketing is one aspect and then the characterisation is one aspect. So it has been a two-prong process in essence."

"I think what I gained from Kapil sir has been invaluable. There is no other way I'd do it. I am very fortunate, privileged and honoured that he welcomed me into his home. He was warm, welcoming and forthcoming. Everything I gained from him during those days is going to be invaluable for the construction of my performance," he added.

Presented by Reliance Entertainment, '83 will begin its shoot from June 5 in Glasgow.

The squad will begin the shooting at a local cricket spot in the Scottish port city for a week, followed by other popular locations like Dulwich College in London, Edinburgh Cricket Club, Nevill Ground at Royal Tunbridge Wells in Kent and The Oval cricket ground.

The film will trace India's historic victory in the 1983 cricket World Cup. It is slated to release on April 10, 2020 in Hindi, Tamil and Telugu.