'Becoming A Hurricane': Ranveer Singh, Kapil Dev Are Cooking Up A Storm For '83

Ranveer: "It's a first of its kind exercise in my acting process where I'll be studying the man himself in flesh for my on screen portrayal of him" 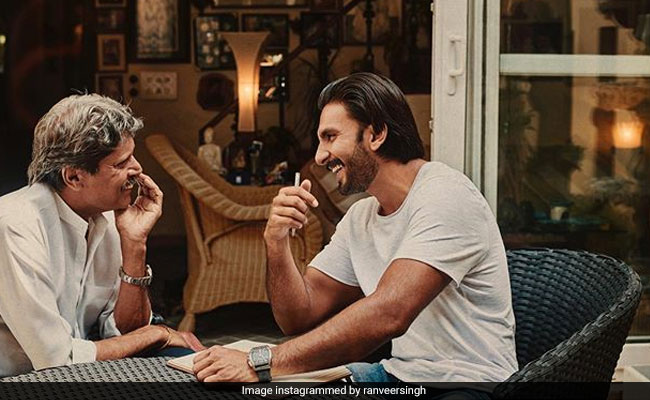 Ranveer Singh is currently preparing for his upcoming film '83, in which he will play the role of famous cricketer Kapil Dev, who is also known as the "Haryana hurricane." The actor, who is known to immerse himself in serious preparation for his roles - whether it be Bajirao in Bajirao Mastani or Murad in Gully Boy - is doing it no differently for '83, which will showcase the story of India's victory in the 1983 Cricket World Cup. Ranveer is spending as much time as he can with the former Indian cricket captain to understand the character for the film before he begins his London schedule. Giving us glimpses of his sessions with Kapil Dev, the actor shared several photographs on social media and captioned it: "Becoming the Hurricane."

Here are the photos we are talking about:

Ranveer Singh is preparing for his role with "insightful conversations" and "inspiring stories" with Kapil Dev.

Earlier this month, Ranveer Singh spent 10 days in Delhi to live with and train with Kapil Dev. The actor even trained with the legendary cricketer in Dharamshala for two days. Over spending time Kapil Dev, Ranveer said in a statement: "It's a first of its kind exercise in my acting process where I'll be studying the man himself in the flesh for my on screen portrayal of him. I'm thrilled to have this opportunity to learn about life from a true legend."

Meanwhile, Kapil Dev, who is the main inspiration for the film, said that it is a "good sign" that the country is making movies on sports, which wasn't the scenario around two decades ago. When asked what makes Ranveer Singh perfect to play the part, Kapil told news agency IANS: "It was not up to me to decide who will play my character in the film. But Ranveer has such great energy. I know that he will give more than 100 percent to the film and the entire team will make this movie a success." '83 is slated to release on April 10 next year.