"Making a film like '83 is a beautiful idea and I know that Ranveer and team will do a great job," said Kapil Dev 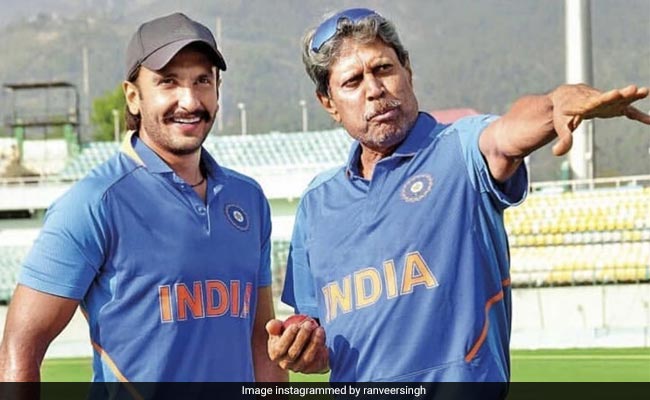 Former Indian cricket captain Kapil Dev, who is prepping actor Ranveer Singh for the upcoming film '83, is ecstatic about the surge in films on sports stars. He says it is a "good sign" as the country was not ready to make movies on sports around two decades ago.

In recent times, Bollywood has seen a slew of successful sports based movies such as Mary Kom, M.S. Dhoni: The Untold Story, Bhaag Milkha Bhaag, Dangal and Sachin: A Billion Dreams.

"The fact that biopics and films are being made on sports stars goes on to show that India is now ready for real films, which is a good sign. Over 20 years ago, India was not ready to make movies on sports," Kapil told IANS in an e-mail interview from the US.

The film '83 is the story of Kapil Dev's captaincy in leading the Indian cricket team to defeat the West Indies in the World Cup final in 1983. Ranveer Singh will portray Kapil's role in the film, directed by Kabir Khan and produced by Reliance Entertainment.

What makes Ranveer the perfect fit to play the part?

Kapil said: "It was not up to me to decide who will play my character in the film. But Ranveer has such great energy. I know that he will give more than 100 per cent to the film and the entire team will make this movie a success."

The duo, along with the other members of the film's cast had a preparation session at the Himachal Pradesh Cricket Association Stadium in Dharamsala last month.

"Making a film like '83 is a beautiful idea and I know that Ranveer and team will do a great job," added the former cricketer, who has come out with a coffee book titled We The Sikhs.

'83 holds an even more special place for the 60-year-old cricketer as his daughter Amiya is working as an assistant director in the film.

He said: "My daughter has never seen me play cricket. However, she told me that she is extremely happy to be a part of this movie. I wish her all the luck."

In his cricketing journey, Kapil is among the first players in the history of the game to have taken more than 400 wickets and scored over 5,000 runs in Tests.

Are records important to him?

"Yes, it felt nice to make a world record. But when you play, records are made and broken," said Kapil, who made his Test cricket debut in Faisalabad, Pakistan in 1978.

India and Pakistan matches are considered to be one of the most exciting contests in Test cricket. How does he look back on the competition with Pakistan over the years?