'83: It's 'Game Time' For Ranveer Singh And His Teammates 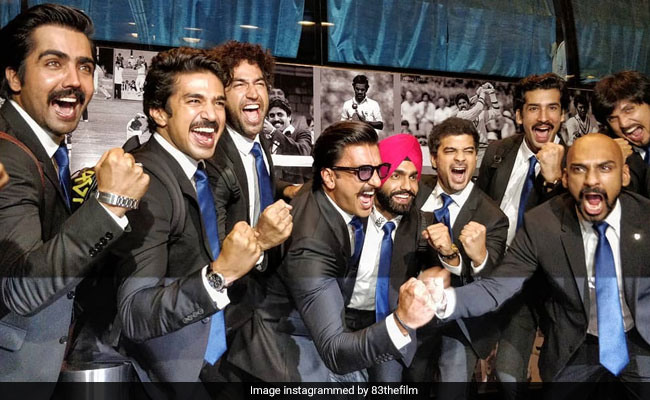 Ranveer Singh along with his '83 co-stars. (Image courtesy: 83thefilm

Ranveer Singh and his teammates have begun their journey and the first stop is London. If you are wondering what we are talking about, we are referring to Ranveer Singh's forthcoming film '83and his co-stars, who are all set to shoot for the first schedule of the film. On Tuesday morning, the makers of the film shared a picture of the film's cast on Instagram. Ranveer, who will be seen playing the role of Kapil Dev in the sports drama, can be seen happily posing with his co-stars Saqib Saleem, Amy Virk, Tahir Raj Bhasin, Harrdy Sandhu, Sahil Khattar and others in the picture. All the actors can be seen dressed in formal outfits.

The caption on the post read, "It's game time. '83 squad on the move. The journey begins." Check out the picture here:

Ahead of the London schedule, Ranveer Singh spent time with Kapil Dev and he gave glimpses of his sessions with the legendary cricketer by sharing pictures on Instagram. He shared pictures on social media and captioned it: "Becoming the Hurricane."

'83 will be directed by Kabir Khan and it will be jointly produced by Madhu Mantena, Vishnu Induri, Kabir Khan and Sajid Nadiadwala. The film is based on India's victory at the 1983 Cricket World Cup and it is slated to release on April 10 next year.