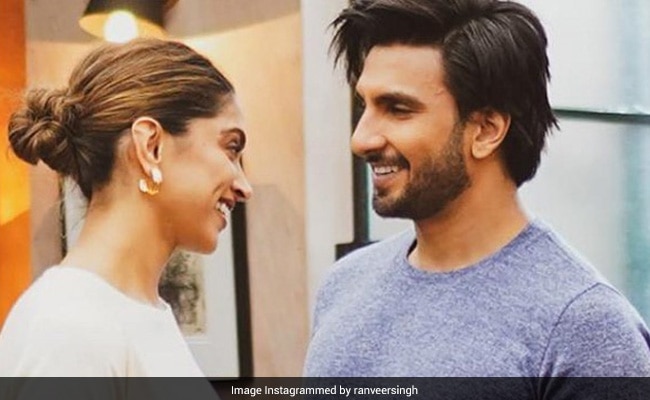 Deepika Padukone and Ranveer Singh might have been together for a very long time now but Ranveer still seems to be head over heels in love with his wife and actress. Proof is the recent pictures that the actor shared on Instagram on Wednesday. The picture that features the celebrity couple gazing at each other with smile on their faces has sent the Internet into a tizzy. Ranveer shared three pictures on his Instagram feed. The pictures look like they have been taken on a film set. While one picture captures the couple in a happy candid moment, the others feature them discussing something with their two friends. But the one common thing in all the pictures is the way Ranveer gazes at Deepika. Keeping the caption simple, Ranveer just dropped a heart emoji and tagged all those were present in the frame.

If you think that the pictures are the only adorable element of the post, you might be wrong. Another mesmerising element of the post is Deepika's comment complementing her husband as she wrote: "too handsome." She also added a lovestruck emoji along with the comment. The new post is breaking the internet with fans of the celebrity couple dropping scores of comments.

This isn't the first time that Ranveer and Deepika have delighted their fans with a sweet post. Earlier last week, Ranveer had shared a selfie with Deepika on Instagram and captioned it: "Peek-a-boo." The Internet was all hearts for the selfie of the couple.

Also, remember that fun video of Ranveer and Deepika dancing as they took the buss it challenge. In the video that Deepika had shared on Instagram, the couple could be seen channelising some very killer dance moves dressed in quirky printed outfits. The video too went viral on the internet and was loved by the fans of the couple.

After years of dating, Deepika and Ranveer got married in a traditional South Indian ceremony sa per Konkani rituals in 2018. The marriage ceremony was also followed by a North-Indian style wedding. The couple had an intimate destination wedding in Italy in the presence of only close friends and family.

In terms of work, they have co-starred in three films, all directed by Sanjay Leela Bhansali. 2013 film Ram Leela marked their first film together after which they worked together in Bajirao Mastani and Padmaavat. They will next be seen together in sports-drama 83. While Ranveer plays former Indian cricketer Kapil Dev in the film, Deepika plays the role of Kapil Dev's wife Romi.