Ranveer Singh's '83 Gets A Release Date: "See You In Cinemas" 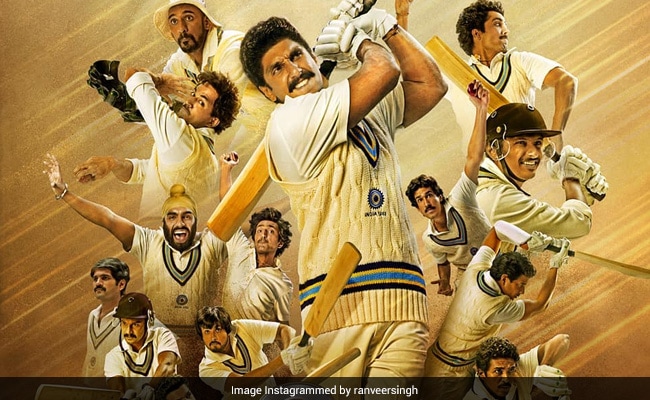 Ranveer Singh on a poster of '83 (courtesy ranveersingh)

Ranveer Singh's much awaited '83, which was rescheduled several times because of the lockdown, finally got a release date - the film is all set to open in cinemas on June 4 now. An excited Ranveer Singh shared the big news on social media and wrote: "June 4th, 2021!" and added that the sports drama will release not only in Hindi but also in languages such as Tamil, Telugu, Kannada and Malayalam. "See you in cinemas," added Ranveer. The 35-year-old actor portrays the role of cricket legend Kapil Dev in '83, which is based on the story of India's historic World Cup win in 1983. Directed by Kabir Khan, '83, will see Ranveer's wife Deepika Padukone making a cameo as Kapil Dev's wife Romi. Deepika too shared the big news in an Instagram story on Friday evening.

Here's how Ranveer Singh made the release date announcement for '83:

When theatres were shut during the pandemic induced lockdown, several big Bollywood movies released on OTT platforms but '83 turned out to be one of the first Bollywood films, whose makers officially announced that they will release it in theatres post-lockdown. With a release date in June, '83 joins the league of films that were awaiting the green light from the Ministry Of Information And Broadcasting, which finally allowed cinema halls across the country to operate at full capacity from February 1, however, keeping COVID-19 safety protocols in place.

Apart from '83, Ranveer Singh's list of upcoming movies also include Cirkus and Jayeshbhai Jordaar, which is scheduled for August 27.

Kareena Kapoor Wished Manager Poonam Damania On Her Birthday Like This