"Today we immersed his ashes in Banganga as we haven't received permission from the authorities to go to Haridwar," Randhir Kapoor told PTI on Sunday 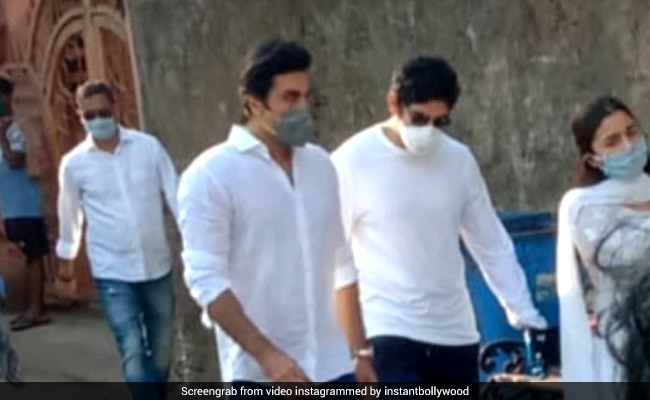 Neetu Kapoor, along with son Ranbir Kapoor and daughter Riddhima Kapoor Sahni, immersed Rishi Kapoor's ashes in Mumbai's Banganga Tank on Sunday. Speaking to news agency PTI, Rishi Kapoor's brother Randhir Kapoor said the ritual was carried out in Mumbai as the Kapoors were not granted permission to travel to Haridwar during the nationwide lockdown, which has been extended till May 17. "We did prayer meet yesterday. Today we immersed his ashes in Banganga as we haven't received permission from the authorities to go to Haridwar," Randhir Kapoor told PTI on Sunday. Actress Alia Bhatt, who is said to be dating Ranbir, and their close friend, filmmaker Ayan Mukerji, were also with the Kapoors during the ritual.

Photos and videos of Ranbir, Neetu and Riddhima praying with folded hands at Mumbai's Banganga have been shared on fan-clubs. Alia and Ayan were also spotted joining the Kapoors for the puja at the Banganga Tank. Banganga is an old water tank, which is inside the Walkeshwar Temple Complex in Mumbai's Malabar Hill.

Meanwhile on Saturday, the Kapoors also had a close-knit prayer meet for Rishi Kapoor at home. A photo of Neetu Kapoor and Ranbir paying their last respects to the late actor went crazy viral on the Internet. PTI quoted family sources as saying that Riddhima, who travelled to Mumbai from Delhi by road, was part of the prayer meet.

Rishi Kapoor died in Mumbai on the morning of April 30, a day after he was admitted to H N Reliance hospital. Rishi Kapoor was 67 and battled leukemia for two years. Riddhima, who is Delhi-based, couldn't attend the funeral held on Thursday afternoon. Apart from family members, those who were by the Kapoors at the crematorium included Alia, Abhishek Bachchan, son of Rishi Kapoor's most frequent co-star Amitabh Bachchan, Ayan Mukerji and industrialist Anil Ambani, who is married to Rishi Kapoor's Karz heroine Tina Munim.