Rakul Preet Singh Brightens Up Our Feed With A Glowing Selfie

The actress shared the photo from her green room 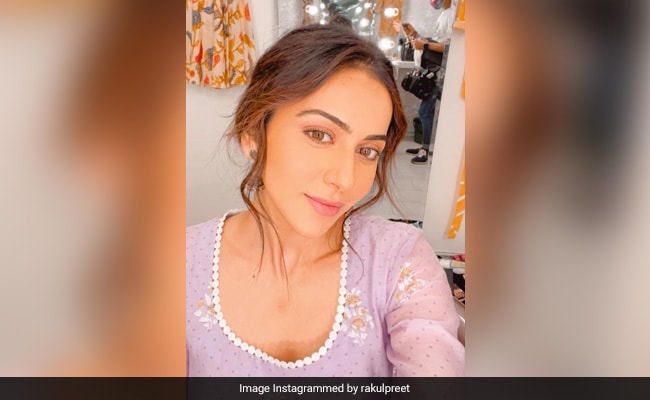 Actress Rakul Preet Singh has been treating herself to some lovely selfies and Instagram users are thankful for it. Sitting in what appears to be her green room, the actress posted a beautiful selfie that reminded us of why she has a loyal fan base in the south Indian film industry as well as the Hindi film industry. Along with the image, the De De Pyaar De star confessed that she was indulging in some “me time.” In the caption, she wrote, “Some me time and selfie time doesn't hurt.” No, Rakul Preet, it doesn't hurt. If anything, the photo just made our day brighter. In a lilac kurta and dewy makeup, the actress looks gorgeous as ever. Fans refused to shy away from complimenting the actress, flooding the comment section with hearts.

Check out the image here:

The self-confessed fitness junkie also often shares videos and photos from exercising sessions. From yoga to weight training, there is nothing the star cannot pull off. And the best part is that Rakul Preet loves working out and inspires her fans to adapt to a healthy lifestyle. Along with the video of her gym routine, she had a positive message to share with fans. The caption read, “Workout because you love your body, not because you hate it.”

In another clip, Rakul Preet also shared her love for kickboxing, earning praise from her colleague, actor Varun Tej. Responding to Rakul Preet's caption that reads, “Don't give up, glove up,” Varun left three glove emoticons in the comments.

And when she is not inspiring us with her fitness videos, Rakul Preet is setting serious wanderlust goals with her travel and holiday photos. In one such image, the actress can be seen chilling by the pool, looking fit as ever in a bikini. The note that accompanies the photo reads, “Holidaying in my head.”

Rakul Preet Singh is known for her work in films such as Venkatadri Express, Loukyam, Sarrainodu, Nannaku Prematho, Spyder, among others. She will be seen next in Doctor G, opposite Ayushmann Khurrana. This film is directed by Anubhuti Kashyap.