"Glove Up" Like Rakul Preet Singh Does In This Video 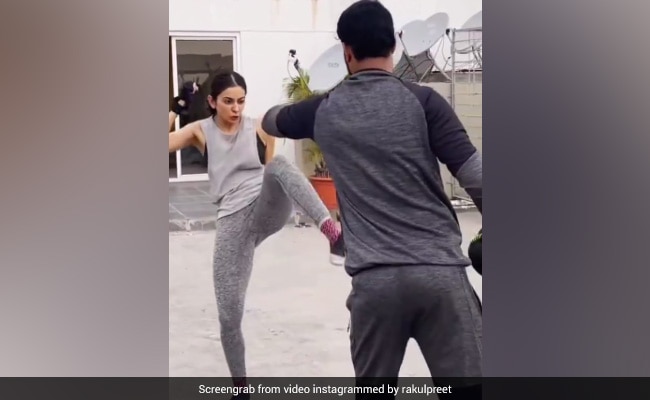 Rakul Preet Singh in a still from the video. (courtesy rakulpreet)

Rakul Preet Singh never misses her fitness routines. Like never. A quick glance through her Instagram profile reveals her love for fitness. The actress, who resorts to hardcore workout routines and kickboxing sessions as means of fitness, shared a video from the latter on her Instagram profile on Friday. Dressed in perfect athleisure, Rakul Preet Singh can be seen doing some high-octane kickboxing in the video along with her instructor. She captioned the video: "Don't give up. Glove you." The comments section of Rakul Preet Singh's post was filled up with heart emojis from her Instafam.

The actress was last seen in Netflix's Sardar Ka Grandson. The film starred Arjun Kapoor and Neena Gupta in the lead roles. It also featured John Abraham and Aditi Rao Hydari in pivotal roles. Rakul Preet Singh signed Mayday last year. The actress will play the role of a pilot in the thriller-drama, which will be directed and produced by Ajay Devgn. The film also stars Amitabh Bachchan.