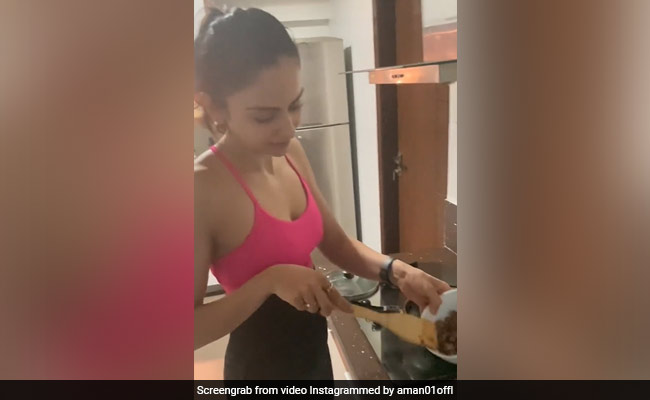 Rakul in a video shared by her brother. (Image courtesy: aman01offl )

Actress Rakul Preet Singh says she knows cooking. However, her brother Aman thinks otherwise. The reason we brought this up today is because, on Wednesday, Aman shared an ROFL video of the actress cooking a batch of pancakes and later, hilariously explaining the final dish or in her words, a "new dish." In the clip, which has been trending on social media since Thursday morning, Rakul Preet Singh can be seen scraping a burnt pancake from a pan into a bowl. When her brother asks, "Didi, ye kya banaya hai aapne?" sarcastically, she hilariously replies: "Pancake scramble, is a new dish. See, it's a dessert. Just like cake pudding and bread pudding, it's like that. I am going to freeze it."

"But you were gonna make pancakes," Aman asks again, to which Rakul says: "Yeah but I didn't want to put too much oil so...." LOL. Too smart, Rakul Preet Singh.

Sharing the video, Aman wrote: "Thank god I said no to pancakes when Rakul asked me this morning." While Rakul justified her dish with this caption on her Instagram story: "It still tasted good."

Check out the ROFL clip here:

In terms of work, Rakul Preet Singh has worked in several Hindi and Telugu films. Some of her popular Telugu movies include Nannaku Prematho, Kick 2, Jaya Janaki Nayaka and Manmadhudu 2. She was last seen alongside Arjun Kapoor in Sardaar Ka Grandson. It is a cross-border love story.

Her next film is with Amitabh Bachchan and Ajay Devgn in Mayday. Rakul has previously worked with Ajay in De De Pyaar De.